12th Gen DRM issues are a thing of the past 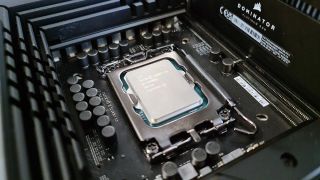 If you’re a gamer looking to build a high performing rig, you’ll probably be considering one of Intel’s 12th Gen options. The Core i5 12600k and i9 12900K deliver excellent gaming performance, but early on, there were some issues with digital rights management. This was because some DRM systems treated the hybrid P (performance) cores and E (efficient) cores as two separate computers, preventing the game from running. Thankfully, that’s all a thing of the past, as according to Intel, all known games that presented issues have been fixed.

When Alder Lake launched in early November, the list of games experiencing issues was extensive, and even a major title such as Assassins Creed: Valhalla was affected. At the time the only real workaround was to disable the E cores, leaving the higher performing P cores to run the game like any other regular CPU. That meant going into your BIOS which was a rather inelegant solution, and a hassle especially for users that aren’t confident poking around in the BIOS.

Shortly after, Gigabyte released a small tool that allowed you to disable the E cores from within Windows. This meant there was no need to reboot, though it was still a temporary solution.

Intel states that a combination of game patches and Windows updates have fixed all known issues. It’s possible there are other games or system configurations that could create a problem, and in that case, Intel recommends you get the latest updates. Should you experience an issue, Intel recommends you contact its customer support.

Now that the software ecosystem has matured, any remaining issues should be isolated. It looks as though hybrid architectures are here to stay and with the lessons learned, hopefully such issues are a thing of the past.