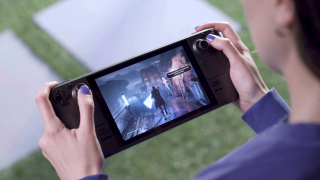 Like an embattled tabloid columnist, the desktop tower PC has been enduring threats to its life for years. No—decades. Sony’s Phil Harrison was ringing its death knell all the way back in 2006, telling Spiegel that the "PlayStation 3 is a computer. We don't need the PC." And even though we probably didn't, the PC endured anyway.

The case changed from beige to black. Disk drives disappeared. We spent less time browsing the information superhighway with it and more time mining Bitcoin. But despite its changing face and usage, the concept of a PC—a box full of powerful components for gaming, work, and entertainment—has prevailed.

And then, in 2021, cloud gaming and laptop hardware caught up.

Nvidia’s GeForce Now quietly achieved something momentous in 2021, making good on streaming services' promises for the last decade and delivering a high-end PC gaming experience to any device. Gaikai and OnLive were the first high-profile services to puff out their chest and promise top-end PC performances on any device through the magic of the cloud, and the tech underpinning those boasts was impressive. Games ran locally within data centres, your inputs sped over from your machine to that data centre, then the cloud registered it and sent back a frame.

Anyone who actually tried to play a game on Onlive or Gaikai, however, would have been able to tell you straight away why these services weren’t going to make an impact on the gaming climate. It felt less like playing a game at 1080p and more like watching a 480p YouTube video of one. And even if you could make out what was happening, the latency was just high enough to make shooting something or timing a jump... a bit miserable. The misunderstanding at the heart of their proposition was that we’d accept a tradeoff of playability for convenience.

Nvidia, knowing very well that this is a market where some consumers will gladly upgrade their 144Hz monitor for one at 320Hz, does not ask you to make that compromise with GeForce Now. You have to concentrate to notice the latency, and the fidelity of the 1080p frames it throws back at you from the gaming PC farms in goodness-knows-where are sharp enough for you to actually appreciate that the game’s running at max settings.

Not only that, this year it upgraded its data centres with RTX 3080s, making GeForce Now by far the easiest and cheapest—and for most of us, the only—way to use the new generation of GPUs for gaming. For all the ways the global hardware shortage has stung Nvidia and its customers, it certainly hasn’t harmed GeForce Now.

Not content to talk us all out of buying a new desktop graphics card with GeForce Now, the company’s own mobile Ampere GPUs make a strong case against it too. The smaller laptop 3080s can’t quite match their desktop counterparts’ performance, but they’re well ahead of desktop RTX 2080s. At 1080p in particular, the standard 15-inch laptop resolution, that’s enough grunt to run any game you’re likely to throw at it at the highest fidelity settings. The most enticing aspect of the spec sheet is the bit that says "in stock," though. Gaming laptops have remained available as desktop parts dried up, tempting players away from the more traditional big box machine.

Valve wants to take that idea to its extreme with the Steam Deck. Preorders of its Switch-like handheld PC exceeded 110,000 systems within 90 minutes, and the Zen 2 + RDNA 2 APU from AMD has enough in its locker to run blockbuster games on that portable display in sprightly fashion. You can’t have one for ages, of course. This is 2021. But you want one, and that’s significant.

Microsoft’s Xbox Game Pass wants in on the desktop PC's action too, adding streaming functionality to the "Ultimate" tier of its membership. Instead of RTX 3080 rigs that could probably beat Shodan in a game of chess, Game Pass Ultimate streaming uses Xbox Series X hardware, and its onscreen results are more modest as a result. But the reactivity and streaming image quality are there.

And users have voted on that fidelity and user experience with their feet. GeForce Now’s free and paid 'founder' members account for 12 million total users. Xbox Game Pass has almost 40 million subscribers, though Microsoft doesn’t break down that figure, so it’s unclear how many are Ultimate subscribers with streaming access.

How do those numbers compare to PC gamers? A recent report from DFC Intelligence (via PCGamesN) tallied a total of 3 billion gamers worldwide, around half of them playing on PCs. While acolytes of the Phil Harrison doctrine will have to wait a while longer before decrying the time-honoured tower’s demise, in 2021 cloud gaming matured to where it’s starting to look like a realistic future.

And that might have more to do with access to games than access to top-spec components. "Netflix for gaming" has become the new "esports is getting really big now, actually" for industry entrepreneurs, an endlessly repeated mantra that Nvidia itself leaned on during GeForce Now's 2015 launch. "Our target market is similar to Netflix," said Phil Eisler, Nvidia's general manager of cloud gaming, on release day (via Washington Post).

It’s been central to Xbox's messaging around Game Pass, too. "Play it on day one with Game Pass," the service’s E3 showcase presentation tells you, while a familiar tile layout of game titles appears on-screen.

Ultimately, access to hundreds of games for a monthly fee rather than single game purchases is the big draw, and playing those games on smartphones and Chromebooks is an added convenience that lowers the barrier for entry.

Sooner than later, the cloud-based Netflix for gaming market will rival consoles and the traditional PC. What we consider to be PC gaming will take on a broader definition, and that’s great news for anyone with a Core i9, a custom cooler, and an encyclopedic knowledge of antialiasing techniques. It means there are suddenly more people playing PC games at max settings—and greater incentive for developers to push the fidelity envelope. It'll be high-poly grapes all round.

In a world where everyone’s playing their games on an RTX 3080, no developer needs to hobble a PC port to accommodate console specs.

We could all even just ditch the i9, and the custom cooler we overlock it with, and just play on a TV screen. We could buy a Steam deck or a gaming laptop. But some never would. Because the enthusiast end of PC gaming’s never really been about convenience. The hardware and the numbers are the point, just as much as the games are. It’s a market where gaming chairs have flourished.

If the desktop gaming PC was going to die off, it would have done so long before streaming and mobile tech came knocking.