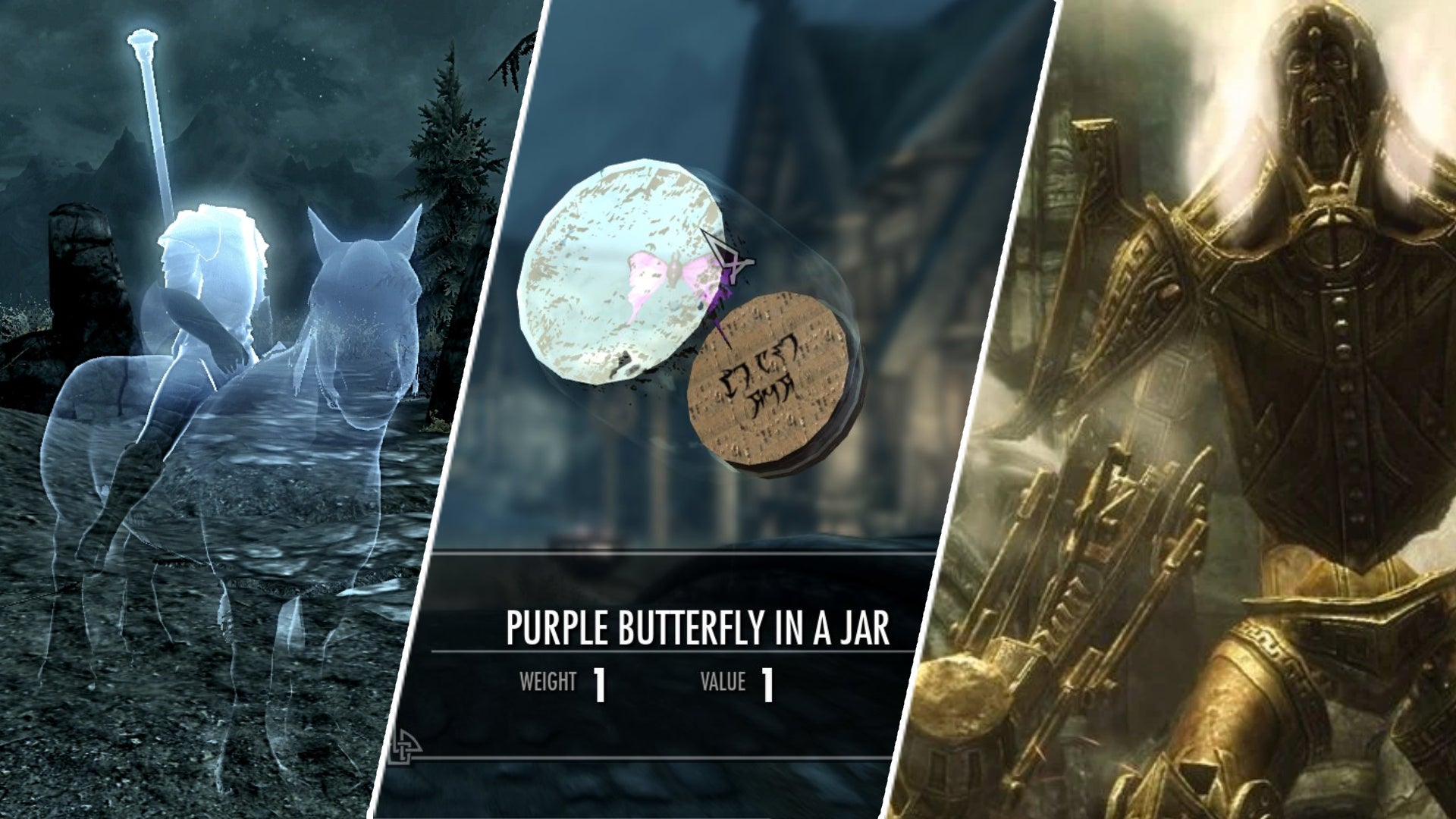 What’s at the heart of these decade-old Elder Scrolls secrets? Sometimes it’s better not to know.

In creative writing class, they teach you: show, don’t tell. Todd Howard and his clan at Bethesda Game Studios obviously took notes on that, because Skyrim is all about stumbling into enigmatic scenes and being drawn to figure out what took place here. It shows you a dead body somewhere unusual, an incongruous set of objects around it, and it knows you’re pulled into the narrative in a way that hearing an NPC telling you about it wouldn’t achieve.

Skyrim’s so good at this style of environmental storytelling that a portion of its player base has been cataloging and uncovering its mysterious scenes, unexplained phenomena, and tiny details that hint at wider conspiracies since its release. What’s especially impressive, on the part of virtual detective and developer alike, is that many of them do have solutions and conclusions, like the ‘treasure foxes’ whose AI pathfinding routines take you towards high-volume treasure areas through a programming quirk. Players aren’t just reaching for meaning – often, the designers and writers really thought about these details, and lay out mysteries for us to eventually solve and uncover.

But many haven’t. So consider the enduring legend of these six mysteries an argument as to why The Elder Scrolls 6 should seek not to provide answers to these questions, but to ask new ones. The last thing we want is an RPG version of Prometheus barrelling through our beloved lore, replacing the enticing with the mindlessly prosaic. Let’s treasure these unsolved mysteries, and let them inflame our imaginations until a new game arrives with a fresh set of head-scratchers.

The symbols inside the bug jars 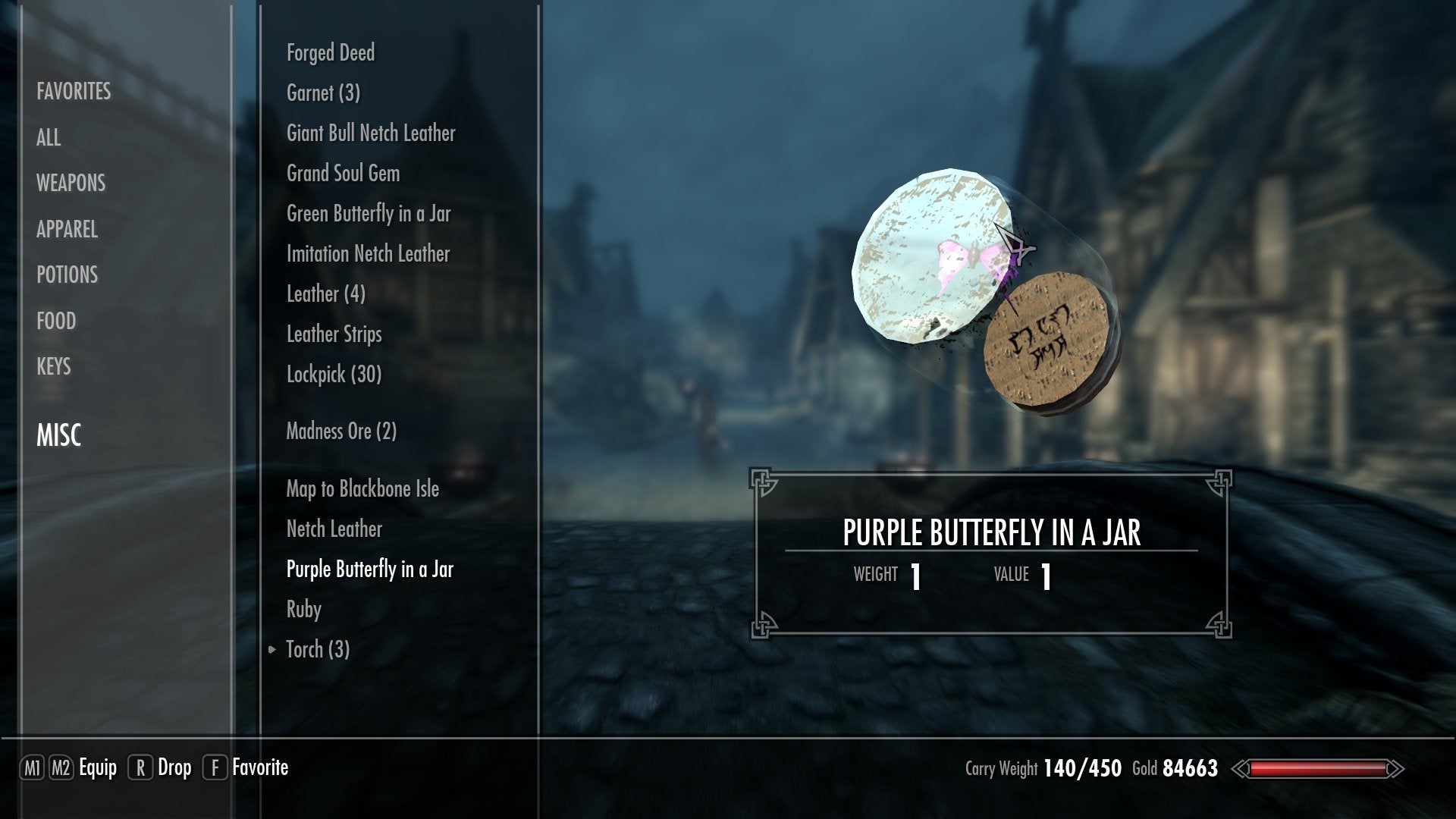 Scattered across the world map, you’ll find a number of insects trapped inside jars. They’re pretty things to look at, and you don’t even have to feel bad for the minibeasts since they don’t seem to require oxygen or food in there and will live indefinitely inside their glass abode. The community has found five of them in total, and they’re just what your player home needs to set off the hearth area.

However, if you look closely on the underside of the jar lids themselves, you’ll see each of them has a strange runic symbol etched onto them. This is no accident – someone at BGS sat and designed a bespoke texture map for these five wooden lids, each of them different. Why go to that effort for decoration?

Trouble is, nobody knows what the runes mean. Attempts to decipher them have all come up with… well, basically gibberish. There’s a theory that these jars possibly pertain to an amnesiac character called Rune who hangs with the Thieves Guild, and might possibly have been part of a subsequently cut quest that explains his true identity. Personally? I’m drawn to the idea that perhaps there are more than five jars out there in the world…

The giant skeletons of Kagrenzel

Ok, this one’s properly Prometheus. Just southeast of Mzulft lies a huge Dwemer ruin called Kagrenzel. These always hold a bit of mystery because the fate of the Dwemer remains unknown and it’s inherently eerie to wander the halls of a lost civilisation’s territory. But there’s something about Kagrenzel that goes beyond the usual chills – it’s the skeletons. 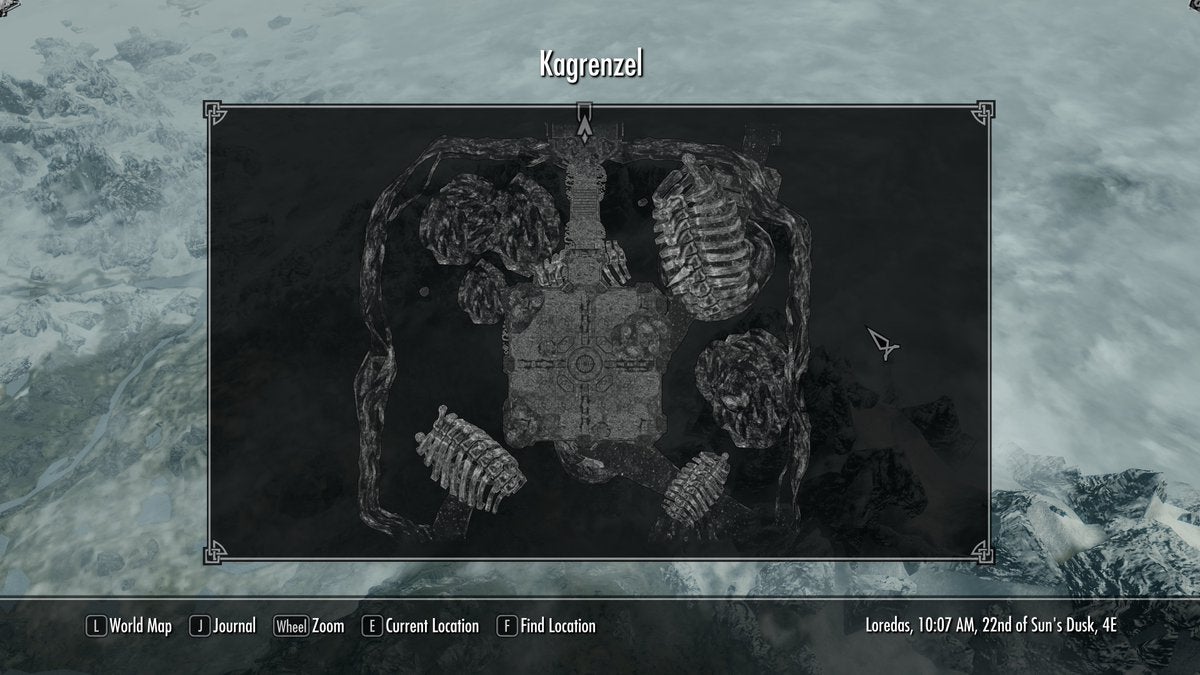 Will we ever see the origins of these bones?

Three enormous skeletal remains dominate the area. They’re far bigger than any creature ever seen in Skyrim, larger than a mammoth or even a dragon. And the assets themselves aren’t just exploded versions of either of the former’s bones, which means BGS spent time making these bespoke. That suggests they’re either important, or were at least intended to be at some point. Another cut quest, perhaps?

Whatever the reason for their appearance, the megaskeletons make Kagrenzel one of the most unnerving locations on the world map. Whatever was down here, however long ago, it would have absolutely messed you up if you’d met it.

A dark secret in the Temple of Mara 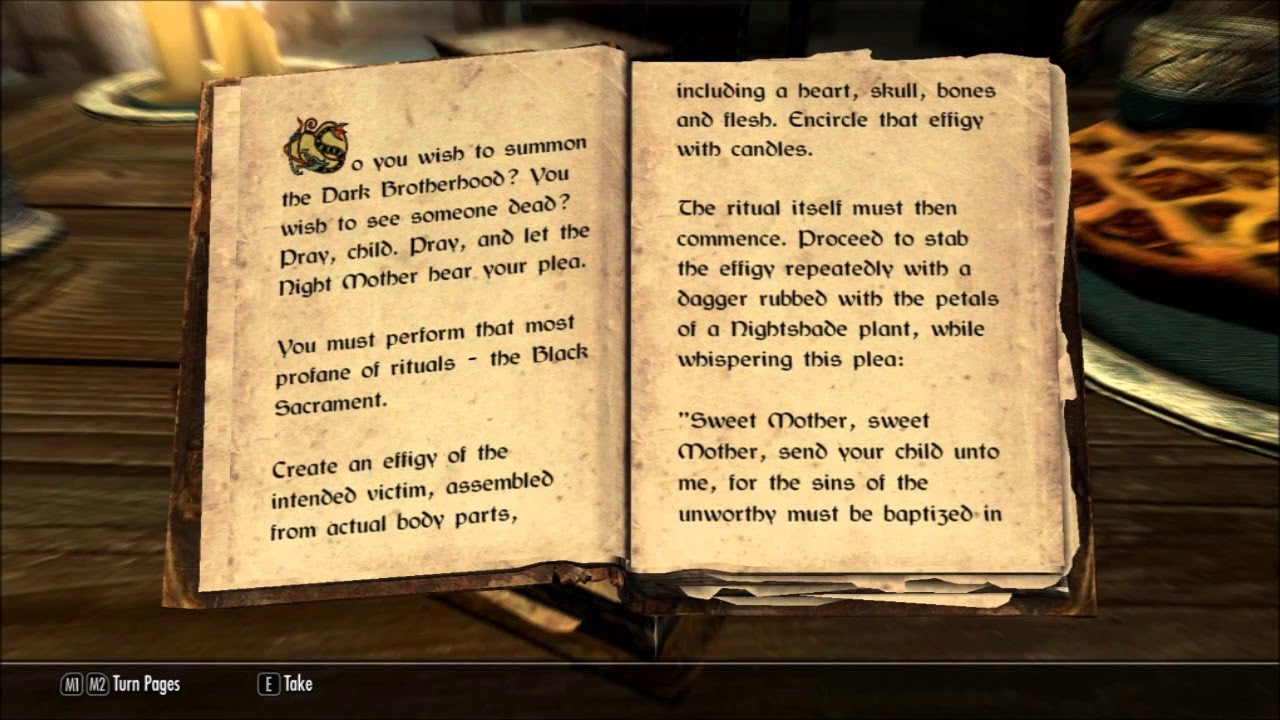 Scene of your own wedding, home to some of Skyrim’s most benevolent characters, temple to the goddess of love itself, the Temple of Mara is one of the warmest and fuzziest locations on a map not exactly brimming with warm and fuzzy vibes.

How did this book get here, of all places? Did someone travel to attend a wedding with dark motives in mind? A spurned lover, perhaps? Or maybe a permanent resident of the Temple simply mislaid their dark tome? Have you ever seen the headless horseman?

I’ve been playing the game for eleven years and never seen him, but the Headless Horseman is very real. Well, to be clear, he’s real in the video game. Video games aren’t real. There isn’t actually a Headless Horseman roaming about in our plane of existence.

Between the hours of 10PM and 4AM in Skyrim though, there is. He seems to spawn randomly, on ghostly horseback, and rides around without apparent motive or meaning. He has no head. That’s all we know about him.

Why is he in the game? How did he lose his head, if he ever had one in the first place? How does he manage to ride a horse in that state, much less dress himself in armour? We’ve come up with nothing to these questions since he was first spotted, and it’s unlikely we’ll get any further without someone from BGS addressing his presence directly.

Tell you what, though: I’d absolutely brick it if I didn’t know this guy was in the game and I happened to see him one night.

Next is my favourite kind of Skyrim mystery: the kind that seems like probably nothing at first, like it’s just some players with active imaginations reaching for something that isn’t there. But then you go and check it out for yourself, and you decide: yes. Yes, there’s definitely something going on here.

What peculiar mysteries lie in this small settlement?

So it is with Rorikstead, a sleepy little village near nothing in particular, where a small community of simple farmers lives in peace. Or so it seems. Because there are a few things that don’t add up around here, like the fact that every house contains a soul gem, a magic stone used to house the souls of the dead in arcane rituals, and the books about Daedric worship dotted around. Sissel asks Jouane to teach her more magic at one point, whereupon he draws his voice down to a whisper and encourages her to be more discreet in case somebody overhears and learns “our secret.”

What secret? No idea mate. Nobody does. This may be another bit of cut content, the remnant of a once deep questline involving the dark rituals of Rorikstead’s inhabitants. Or it might be – and this is my personal preference – a deliberate mystical dead end, an enticing hint that purposely has no conclusion.

The fate of the Dwemer This is the big ticket item for all Skyrim loremasters, detectives, enthusiasts, and documentarians. What happened to the Dwarven race that built so many structures around the map, and who caved into Morrowind and Oblivion’s mountains? What became of the people who were so advanced they made mechanical sentries who still guard the halls today, long after the Dwemer disappeared? It’s a decades-old mystery, and whatever you’re imagining happened to them, it’s definitely more interesting and satisfying than anything BGS could come up with at this point.

That’s no slight on the developer. It’s amazing at lore, and at world-building. But when you let a mystery run like this, when you let a fanbase turn it over in their minds and really take ownership of it, there’s simply no wrapping it up at a later date. Ridley Scott, George Lucas, and many other filmmakers were seduced into answering the questions their fans wanted answered, only to find that there could be no possible satisfying explanation, nothing that didn’t make the old material retrospectively silly.

Instead of any attempt to shed light on this famous mystery, I’d like to see The Elder Scrolls 6 build a new point of intrigue with equal depth. These are the little nuggets that keep us coming back to the game for a decade after release, and trick us into thinking we’re inhabiting a real place. These carefully placed objects, enigmatically written books, unexplained voice lines and teasing dead ends are what make Elder Scrolls games special. More of this sort of thing.