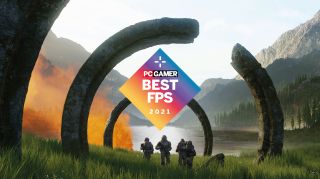 Halo Infinite earns our Best FPS award. To see our other winners so far, head to our GOTY 2021 hub —updating throughout the rest of the month.

Nat Clayton, Features Producer: I have my problems with Halo Infinite. Its story is a hasty sweeping up of two decades of lore, its open world is largely redundant, and it's broadly lacking in the visual spectacle that makes Halo feel like Halo. But bloody hell, has shooting aliens on a massive hula hoop never felt better than this.

Halo Infinite has been smart in deciding what to bring back and what to update. We're back to a fairly small roster of baddies with very distinct strengths, weaknesses, and behaviours. Tackling a room full of Brutes and Jackals feels meaningfully different to taking on Elites, Grunts or Hunters, and you're constantly swapping between new weapons based on what's best for the job. But Master Chief also has a momentum he's never had before—our lad is still a walking tank, but he can now whip himself from room to room with a grappling hook, mantling over ledges and sliding down stairs to weave around plasma fire.

Fights are chaotic and dynamic as ever, but now Chief himself moves with a frenetic urgency, a five-ton Titanfall 2 pilot dropped into the middle of an alien war. Even when Zeta Halo itself has worn out its welcome, fighting the Banished never loses its lustre.

Wes Fenlon, Senior Editor: Infinite's weapons have a crispness that makes firing them feel powerful and precise. Like Nat said, 343 did a fantastic job deciding what elements from past games to bring back and how to update them. Even though the multiplayer has gotten some deserved flak for a crappy Battle Pass, I don't think I've seen a word against its gunplay. It just nails it.

The guns are even better in the campaign. There are a few weapons that I found wimpy in multiplayer that turned out to be a blast in the campaign, where they have more dramatic tuning and great situational uses. The Pulse Carbine absolutely tears through Covenant shields, and the Heatwave's ricocheting wave of energy is my new favorite way to kill Jackals cowering behind their shields.

The campaign almost pulls off a grand open world reimagining of Halo as we know it. I disagree with Nat that the open world is redundant—I think it consistently delivers the fun of snack-sized Halo battles, even if the side missions themselves are all simplistic. Infinite doesn't have a single mission to rank up there with Bungie's best, and it feels like 343 could've done more with its open world. But it does give you a huge playspace to grapple around in, some really gorgeous views, and tons of combat scenarios to jump into however the hell you want. I love that I can just drive up to a base with a Warthog or a tank or walk in with nothing but a Needler, scrounge weapons on the fly, and blow Phantoms out of the sky when they dare drop in reinforcements. Not today, Banished.

Jody Macgregor, AU/Weekend Editor: Once I upgraded the grappling hook to have a shorter cooldown, I totally fell for Halo Infinite. Being able to sling up any mountain or tower by chaining grapples together made skipping across the map rescuing every squad of marines a blast. It helps that there's no penalty for just leaping off a cliff if you feel like it, because I do feel like doing that, quite a lot. With no fall damage, an open world with endless disposable vehicles to cross it, and the enemies' goofy combat dialogue, Halo Infinite has a bunch of my favorite parts of Borderlands 2. That's not a comparison I expected to be making, but here we are.

The enemy AI is solid, too, flanking when you don't expect it, hurling grenades when you're in cover—and, of course, shouting they're doing that so you notice and think, "What clever AI!" The marines aren't quite so smart, though that seems apt. When one stood under a Warthog I was calling in and got crushed by it, another shouted, "The Banished just ran them over!" Look, they're not geniuses, but they're my guys, and rolling into battle with a truck full of them just feels right. They even keep up when I'm hopping across mountains like a goat, which is a minor miracle of pathfinding.

After I finished the campaign I went hunting for more of the skulls that let you modify difficulty and whatnot. The one that makes rare combat barks trigger more frequently has turned the marines and Grunts into part-time comedians, and that makes it even better.