Challenging The New Bosses In Eldest Souls: Depths Of The Forgotten 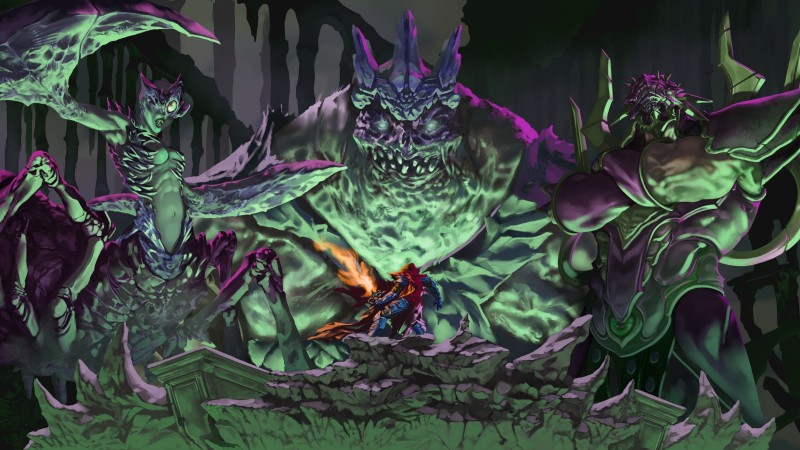 As someone who enjoyed Eldest Souls (check out my review), I was excited to revisit the game and test my skills against Depths of the Forgotten’s new challengers. As expected, they throttled me time and again. Here’s a breakdown of what each one entails.

This decaying mass of royal flesh loves swinging a long-reaching ax that shaves off a huge chunk of health if you’re on the wrong end of its blade. As a former monarch, the Rotting Crown appropriately summons zombified minions to do his bidding. These shambling corpses primarily serve as a distraction, but they’ll unleash a small, damaging blast if you get too close. These minions are immune to your attacks; the only way to eradicate them is by striking two large bells situated on opposite sides of the arena for a cool element of environmental interaction. The Rotting Crown lobs waves of energy orbs and unleashes arena-wide pattern-based assaults. The key to the fight became managing the small fry, monitoring bell cooldowns while also taking big shots at the man in the chair when I could. Like the bosses in the main game, this boss forces players to juggle a lot and can feel overwhelming at first. But I found more and more windows of opportunity with each attempt, and The Rotting Crown makes for a fitting addition to the existing pantheon of foes. You can watch an entire battle against The Rotting Crown in the video above.

The Rejected Daughter is an eight-legged terror that disembowels players with her twin scythe-like arms. She’ll even spin her whole body to bounce around the stage like a grotesque buzzsaw. The Rejected Daughter loves using venom-based attacks to poison players, such as spraying the arena with hazardous green zones. The only way to purify these areas – and yourself should you become poisoned – is to drink from one of three fountains. These wells recharge after each use, and the Rejected Daughter occasionally blankets the field in her webbing to make fountains inaccessible. Her web also slows your movements, meaning you’ll need to focus on attacking the web sacks generating the threads to free yourself. The Rejected Daughter is a faster-paced fight that became my favorite of the three new bosses due to having to manage status ailments, its implementation of the arena itself, and because spiders are pretty cool.

As his name suggests, Zylad is an armored-clad warrior wielding a vast arsenal of weapons. Various types of swords, shields, spears, scythes – you name it, Zylad probably uses it, and he isn’t shy about throwing all of these killing instruments at players. Since they’re all floating around the arena, surviving means keeping your eye open to see which one makes a move while keeping tabs on Zylad himself. The devious, sometimes unpredictable manner Zylad combines weapons attacks made him the toughest to battle. I often died thinking he would zig where he zagged, and he has a particular fondness for wide-reaching assaults affecting wide radiuses. But that only means that taking him down feels supremely satisfying.

Depths of the Forgotten offers a strong reason for Eldest Souls fans to regain the courage to endure a few more arduous bouts. If you're up for the challenge, you can play the expansion now on all platforms you can play Eldest Souls. That's PlayStation 5, Xbox Series X/S, PlayStation 4, Xbox One, Switch, PC.