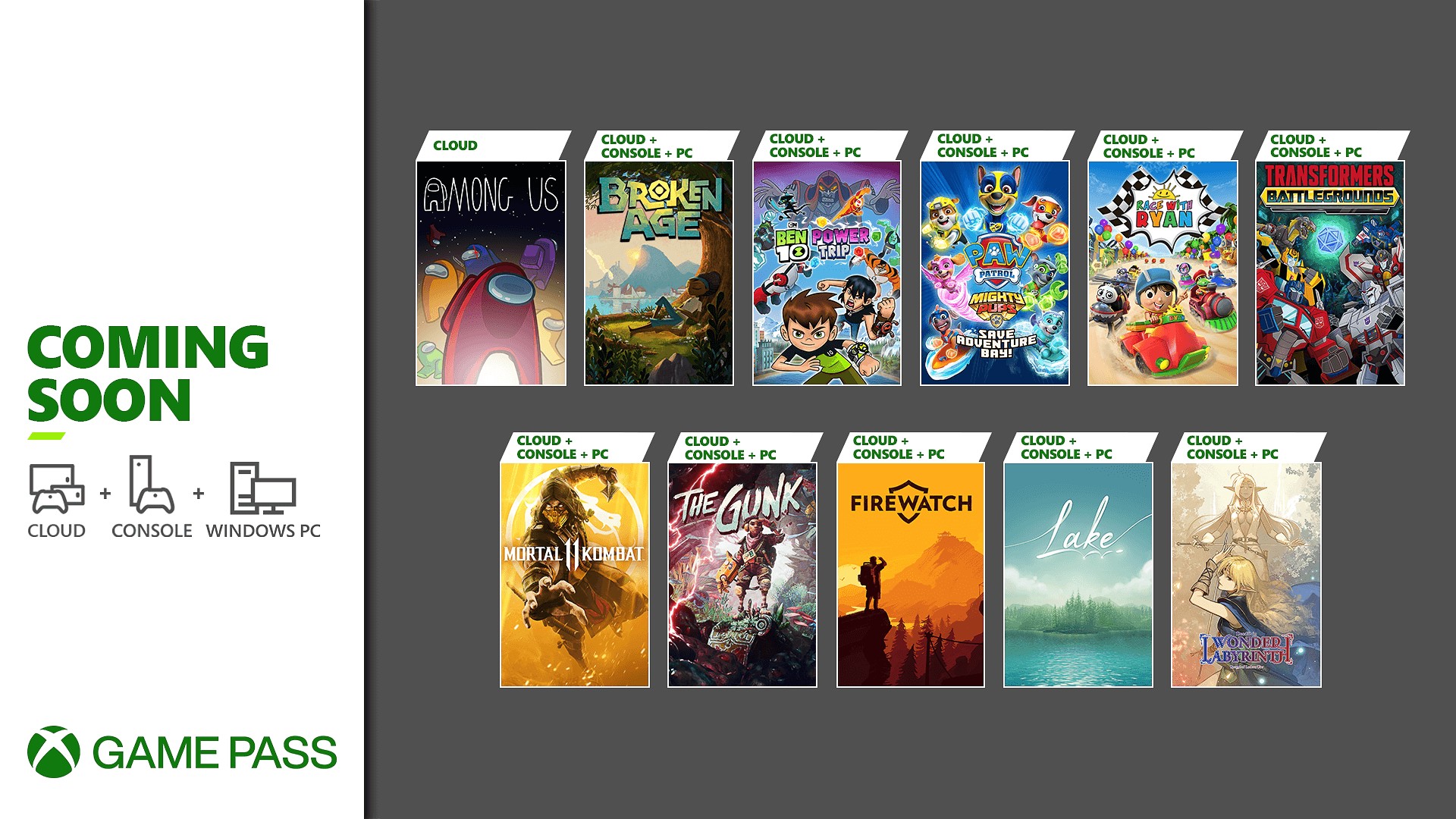 We’re closing out the year with more games (please act surprised). It’s been an incredible year for Game Pass and I’d love to hear what your favorite moments were or your favorite Game Pass games you played on Twitter over at @XboxGamePass. For now, let’s seal the deal on 2021 and check what’s coming soon!

Among Us (Cloud) ID@Xbox – December 15 Coming soon to Xbox Cloud Gaming (Beta) with Game Pass Ultimate! Play with 4-15 players online or via local Wi-Fi as you attempt to prepare your spaceship for departure. But beware, as one or more random players among the crew are Impostors bent on killing everyone! Ben 10: Power Trip (Cloud, Console, and PC) – December 16 Evil Hex has cursed Europe – and only Ben 10 can stop him! Explore a 3D world filled with combat, puzzles, and secrets as you save the day.

Firewatch (Cloud, Console, and PC) ID@Xbox – December 16 Firewatch is a single-player, first-person mystery set in the Wyoming wilderness, where your only emotional lifeline is the person on the other end of a handheld radio. Perched high atop a mountain, it’s your job to look for smoke and keep the wilderness safe. You’ll explore a wild and unknown environment, facing questions and making choices that can build or destroy the only meaningful relationship you have.

The Gunk (Cloud, Console, and PC) ID@Xbox – December 16 Available on day one with Xbox Game Pass: The Gunk stars a duo of gritty space haulers, struggling to make a buck as they chance upon an untouched planet brimming with life. They’ve come to gather alien plants and other valuable resources, and it looks like they’ve hit the jackpot. Ultimate members can play The Gunk with Xbox Touch Controls on day one with Cloud Gaming, no controller needed! Lake (Cloud, Console, and PC) ID@Xbox – December 16 It’s 1986 – Meredith Weiss takes a break from her career in the big city to deliver mail in her hometown. How will she experience two weeks in beautiful Providence Oaks, with its iconic lake and quirky community? And what will she do next? It’s up to you.

Mortal Kombat 11 (Cloud, Console, and PC) – December 16 Mortal Kombat 11 is the latest installment in the critically acclaimed franchise, providing a deeper and more personalized experience than ever before with an all-new Custom Character Variation System that gives players the creative control to customize versions of the entire character roster. Developed by award-winning NetherRealm Studios, Mortal Kombat 11 introduces a new cinematic story continuing the epic saga that is more than 25 years in the making. PAW Patrol Mighty Pups Save Adventure Bay (Cloud, Console, and PC) – December 16 A fallen meteor has given the pups mighty powers – and left Adventure Bay in a mighty mess. Now, it’s up to you and the Pups to use their powers, rescue skills and gadgets to make the town PAWsome again!

Race With Ryan (Cloud, Console, and PC) – December 16 Take the wheel as Ryan and all your favorite Ryan’s World friends, including Combo Panda and Mo! Race your way to the top in Career Mode or speed past your friends in 2 – 4 players split-screen races, the fun keeps coming. Will you be first across the finish line?

Transformers: Battlegrounds (Cloud, Console, and PC) – December 16 With Earth under invasion and Megatron, leader of the Decepticons, close to capturing The Allspark, Bumblebee and the Autobots need a new commander to help them restore peace to the universe – you!

If you didn’t catch Melissa McGamePass’ email on Twitter, we had some news drop at The Game Awards last week and shared four new games coming to PC Game Pass on day one! These titles join the already packed lineup of day one games coming to PC like Total War: Warhammer III, Redfall, A Plague Tale: Requiem, S.T.A.L.K.E.R. 2: Heart of Chernobyl, and more. Check out the reveal with Dave, GaTa, and 100 Thieves and stay plugged in on Xbox Wire for more updates about these games in the future. For more information, check out The Game Awards recap on Xbox Wire.

Pigeon Simulator (Cloud, Console, and PC) Play as the world’s most notorious birds and help them in their quests for revenge, love, and world domination. Poop on everyone. Destroy everything. Join the Pigeon Revolution!

Trek to Yomi (Cloud, Console, and PC) As a vow to his dying Master, the young swordsman Hiroki is sworn to protect his town and the people he loves against all threats. Faced with tragedy and bound to duty, the lone samurai must voyage beyond life and death to confront himself and decide his path forward.

Unannounced game from Hugecalf Studios (Cloud, Console, and PC) Hugecalf Studios unveiled a new game that will be coming on day one to Game Pass. Nothing more to say or see here but be on the lookout for more news from our friends at Hugecalf!

In Case You Missed It

Serious Sam 4 (Cloud, PC, and Xbox Series X|S) ID@Xbox – Available now Humanity is under siege as the full force of Mental’s hordes spread across the world, ravaging what remains of a broken and beaten civilization. The last remaining resistance to the invasion is the Earth Defense Force led by Sam “Serious” Stone and his heavily armed squad of misfit commandos. The classic Serious Sam formula is revamped by putting an unstoppable arsenal up against an unimaginable number of enemies.

Townscaper (Cloud, Console, and PC) ID@Xbox – Available now Build quaint island towns with curvy streets, soaring cathedrals, or sky cities on stilts. Just plenty of building and plenty of beauty. Townscaper is a meditative toy. Pick colors from the palette, plop down colored houseblocks, and Townscaper will turn those blocks into the ocean-town on your dreams!

Minecraft Dungeons: Cloudy Climb (Seasonal Adventures, Season 1) – Available now Rise to the challenge as Minecraft Dungeons enters its first Seasonal Adventure: Cloudy Climb. Discover an all-new progression system and unlock seasonal rewards through time-limited challenges or investigate the mysterious Tower– a soaring structure that puts your skill to the test. Are you strong enough to reach the top?

Gear up for the Holidays with Perks from Xbox Game Pass Ultimate, including new content from Rogue Company, Gems of War, Vigor, and Super Animal Royale. Don’t forget to claim all these Perks and more in the Perks gallery on your Xbox console, Xbox App on Windows PCs, and the Xbox Game Pass mobile app.

Rogue Company – Season Four Perk Pack – December 14 Are you ready to go Rogue in Season Four? Get an Xbox exclusive outfit for Ronin along with 20K Battle Pass XP. Xbox Game Pass members can claim this pack of Rogue Company content for free! This Perk content requires Rogue Company to use.

Vigor : Make it Rain Bundle – December 16 Jump into Vigor and make it rain! Get instant access to a unique uniform and a sling bag, free with Xbox Game Pass Ultimate Perks! Claim your pack today, equip yourself with deadly weapons and head into the Outlands fully armed. This Perk content requires Vigor to use. Ultimate members, we’re adding Xbox Touch Controls to 10 more games, nine of which are ready to play from the cloud today! Check out our growing collection of over 100 touch-enabled games with cloud gaming on the Xbox app for Windows PCs, Xbox Game Pass mobile app on Android devices, or xbox.com/play on your Windows PCs and Apple phones tablets.

The following games are leaving the Game Pass library soon, so be sure to jump back in before they go! As always, remember to use your membership discount to save up to 20% on your purchase to keep these games in your library.

My brain is struggling to accept the fact that 2022 is right around the corner. While I come to grips with 2022 being a thing, take a moment to follow us on Twitter at @XboxGamePassPC and @XboxGamePass to get a heads up when games are added to the library. Don’t forget to let your friends know they can get 3 months of PC Game Pass for $1 to put more mileage on their mechanical keyboard. See you next year!