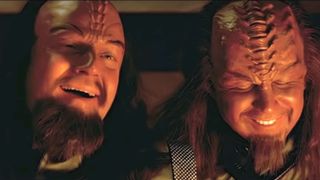 Libre Office just announced that, from February onwards, the Klingon language will be supported by the free word processing software. Thanks to the dedication of rebel nerds at The Open Document Foundation, founded by some previous Open Office employees, you'll soon be able to use your custom Klingon Keyboard to type out your own works of science fiction, and keep the cult following alive.

At least, we assume it's support for typing in Klingon, and not just a translation of the UI—which would be a little disappointing.

A tweet from the official Libre Office twitter, brought to our attention by Sweclockers, outlines that initial support for Klingon, as well as Interslavic, will soon join the 100 other languages currently touted by the LibreOffice 7.3 software.

Those who have been sucked into the world of Star Trek lore, even those who aren't as familiar with the intricate, deep-space worldbuilding surrounding the sci-fi series, will have heard of the Klingon language. Many may have even picked up some phrases in order to spout undetectable profanities about mothers having smooth foreheads at your friends (that's 'Hab SoSlI' Quch,' in case you were wondering).

I mean, it is customary when you're exposed to a new language—it's not just me, right?

Whatever level you're at right now in Klingon, there's always room for improvement. And there are countless sources across the web for learning Klingon, also known as Klingonese, or tlhIngan-Hol.

Of course, Libre Office adding Klingon support is a publicity stunt, but one that'll highlight the versatility of the software, and bring attention to the company's plan to "boost IT skills in places which don’t otherwise have software in their native languages." A noble goal.

The official announcement post declares, "Undeterred by the confines of a monogalactic community of translators, LibreOffice numbers are growing. Hundreds of millions or earthlings alone now have powerful tools honed in their native languages.

"Together we bring free and open source software to the Nekrit Expanse. We can go into space, and beyond. Use, inspect, improve and share freely — with all. Full tut ahead."

I'm amazed to discover that the number of Klingon speakers even purportedly outnumbers those that speak Navaho by seven-to-one, although only a select few are actually fluent. That number is something like 20 people in the whole world. But perhaps those numbers will increase from February onwards, who knows?

Soon you'll be screaming 'qo' mey poSmoH Hol from the rooftops, or 'language opens worlds,' the highly appropriate motto of the Klingon Language Institute (KLI)—yes, they have their own institute, which you can join for a measly $10 a year.