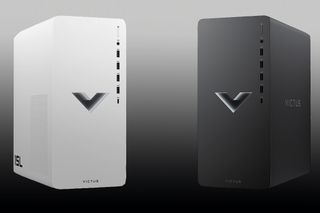 HP announced its line of Victus PCs a while back, with the promise of more affordable gaming over the Omen series. At CES we saw HP's new cases with a chamber for cooling, a versatile looking gaming monitor with the HP Omen 27u, and now we're getting a look at HP's first new desktop PC with the gamer on a budget in mind.

At least, we hope it is as the Victus by HP 15L Desktop doesn't have any list prices as yet. What we do know is some of the configurations on offer. These PCs come with a choice of up to an Nvidia GeForce RTX 3060 Ti or the AMD Radeon RX 6600 XT GPU. These can be paired with up to either a 12th Gen Intel Core i7, or the AMD Ryzen 7 5000G Series processors with up to 32GB of DDR4 RAM.

As it is 2022 and this is a gaming PC the Victus 15L Desktop also has a customisable RBG logo on the front. Otherwise the case has a sleek looking box design with white and black options.

There are four USB A and one USB C, and  headphone ports that look easily accessible on the front. The bezels boast post-consumer recycled plastic, and the paint is water-based with sustainability in mind. The unit is also Energy Star certified and EPEAT Silver Registered. HP lists its Omen Obelisk desktop PC as only having a bronze EPEAT rating, so for the budget and energy conscious this unit could be a good choice.

Looking at similar PCs available at the moment they can range between a bit over $1,000 and $2,000 USD. Without knowing the exact configurations of these parts, plus other options like the SSD, it's really impossible to guess where this will sit on the pricing front. Given HP is marketing this as a cheaper option to the current Omen series, we’re hoping it’ll live up to its name. HP’s Victus 15L Desktop is set to come out in February, so at least we won’t have long to wait to find out.