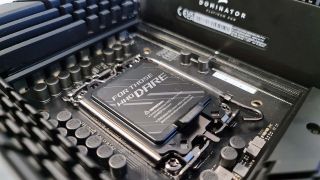 Intel Alder Lake won us over in 2021 with its newfangled architecture, gaming performance, and generation-on-generation uplift. Though for all its architectural wins, the 12th Gen CPU equation has been in desperate need of cheaper chipsets and accompanying motherboards—those that will make the fantastic Intel Core i5 12600K really sing on a budget.

And those cheaper chipsets are on the way, as Intel has announced the complete lineup of 12th Gen compatible chipsets for its Alder Lake chips.

These new chipsets—H670, B660, and H610—offer a mix of features you'd expect to find on high-end Z690 motherboards, although with a few key differences to theoretically keep costs down. From the lot, it's the B660 that we'll likely run into most often inside pared-back gaming motherboards, so those are the specs you'll want to pay attention to most of all.

The B660 offers a persuasive list of features for a Core i5 12600K build, and that's really what we wanted out of these new chipsets. That chip is very convincing on its own, but when paired with a high-end Z690 motherboard it loses some of its competitiveness in pricing. The B660 is a little more restricted on lanes versus the Z690, as expected, but by the looks of it there should be plenty of bandwidth for everything a gamer will need from their PC: high-end PCIe 4.0 graphics, NVMe SSDs, and plenty of SATA ports.

And we talk about these chipsets being a good paring with the cheapest K-series of the lot so far, but Intel is rolling out the remaining 12th Gen chips in these coming months, as announced at CES 2022. These cheaper motherboards will also make for a good fit for those more moderate processors, such as the Core i5 12400 that we suspect will be a decent pick for gaming on a budget.

The H610 offers the most slimmed back feature set of the lot, but we're likely to see that occupy space in desktops for business more so than any gaming PCs. Still, it's an option, though its support for just a single channel of memory will have this motherboard impact performance more than most.

Something important to note: If you want to overclock your chip's P-cores and E-cores, you'll need to pick up a motherboard with the Z690 chipset already available, as none of these cheaper boards support tweaking your chip. We've already looked at a few good candidates, such as the MSI MPG Z690 Carbon WiFi or ASRock Z690 Taichi.

I'd also be surprised to see any cheaper motherboards fitted with DDR5 ports, rather than those for the cheaper and more common DDR4 standard. While Z690 boards tend to support the DDR5 standard, supported by all Alder Lake chips themselves, it is far pricier than DDR4 as it stands today, and it wouldn't make much sense for budget builds. Same goes for PCIe 5.0 support from the CPU, it makes little sense on a budget board, and may be first on the chopping board in the name of cost cutting with cheaper motherboards.