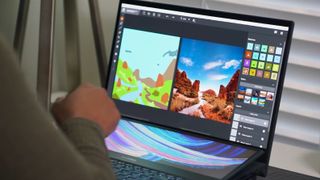 It's incredible, the things we can do with AI nowadays. For artists looking to integrate artificial intelligence into their workflow, there are ever more advanced tools popping up all over the net. One such tool is Nvidia Canvas, which has just been updated with the more powerful GauGAN2 AI, to replace the original GauGAN model, along with loads of new features.

The Nvidia Canvas software is available for free to anyone with an Nvidia RTX graphics card. This is because the software uses the tensor cores present in your GPU to let the AI do it's job.

If you've not had a go, it basically involves scribbling blobs onto the left canvas with brushes marked 'gravel,' 'cloud,' or 'water' while the AI translates those blobs into a landscape on the right.

This new update sees a few more options in terms of brushes added, such as 'flower' and 'straw.' The effectiveness of the brushes was always partially dependent on your skill as an artist, but the AI also just got a little bit more advanced to help fill any creative voids.

A recent GauGAN2 browser demo proved that to Nvidia's latest AI, a picture is worth not a thousand, but just a few well-placed words. In seconds, the AI can translate a string of words into a photorealistic image, and bring to life any vague concept that you yourself could barely envisage.

This gorgeous scene was generated only from the words "rocky outcrop overlooking a stream in a forest." Thanks to the 10 million landscape images Nvidia had previously fed the AI using the Selene supercomputer, an imaginary, yet highly believable landscape was born.

Now that the Nvidia Canvas software has been updated to run on the GauGAN2 model AI, we thought we'd put it through it's paces. That way you can decide if it's worth a go before downloading it.

For the first test, I made attempts to reconstruct a landscape image I found in case anyone planned to use the tool to overcome copywrite restrictions (because you can't copywrite the shape of nature). The image on the left is the found image, and the one on the right is my attempt to basically plagiarise nature.

Okay, it's not the greatest copy, but the AI did try its best with my weird scrawling. The main hurdle for it seemed to be scale and depth. Check out the trees on top of the cliff—they're meant to be far away but no matter how small I made the dots, the AI couldn't quite get the scale right.

So, perhaps GauGAN2 is not the best at trying to rip off actual images by painting them anew. However, with some nudging and no small amount of imagination, I managed to produce a vague reflection of the image. With this one, you can at least make out the basic composition.

There we go; much less like a trippy-ass Dali painting. It did take a little work to get the AI to understand what I was looking to do, but with the use of the layer feature and a lot of shuffling around, I feel like the result could pass as an actual photograph, taken on this plane of existence.

I think the issue before was in my attempting to copy it tree-for-tree.

All in all, it's a really fun software to play around with. The AI even managed to photo-bash something believable from my ridiculous, amorphous scribblings, which is quite impressive. Plus, it's generated in 4x higher resolution that of the previous AI, so you can export 1024x1024 images now. I just wish it would let me design landscapes in landscape, really.

So while it's not quite the 4K desktop background designer we were looking for, it's still very impressive, and I can't wait to see what the next iteration can do. The Nvidia Canvas software is available for free here, and will work for anyone with an Nvidia RTX graphics card.