2021 is the year I learned to love gaming with friends 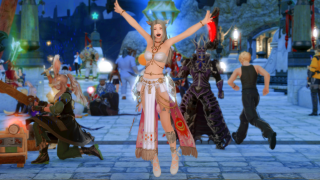 I've spent a considerable amount of my gaming life enjoying the hobby alone. Sure, I spent a few years of my childhood playing Toontown Online, exploring obscure online rhythm games, and being way too young to hang around on social sim IMVU. But when I think of young Mollie gaming, I picture her huddled alone in her Mum's conservatory—tiny space heater glaring, a glass of elderflower cordial and lemonade on the floor, and playing Kingdom Hearts 2 on her obnoxiously bright pink PlayStation 2 Slim for the fifth time.

I loved playing games on my own, and to be fair I didn't have much of a choice. My Mum had an irrational fear of the internet so we didn't have an online connection until I was 18 years old. As a fellow gamer, my Dad was considerably less afraid of the world wide web, so I was able to spend four days a week with the internet, while my weekends were offline.

It meant I never really found much time to spend with online games growing up and ended up gravitating towards JRPGs pretty early on. They're the perfect offline, solo experience—hours of sprawling worlds and narratives, and I could spend months grinding my entire party up to max level. If I wasn't playing JRPGs I'd usually poke around in fighting games, which weren't as fun alone but still offered tons of replayability. The huge time sink made the whole "no internet for half a week" thing less painful as a teen who grew up in the late 2000s and early 2010s.

That penchant for gripping solo experiences carried me through my entire teenagehood. I'd occasionally dip into Call of Duty: Black Ops to shoot some zombies with my high school boyfriend or build some cool shit in Minecraft together. But most of my multiplayer experiences still came from couch co-op, hanging out with my pals in the same room while staring at our tiny allocated corner of the screen. Even when I got super into Final Fantasy 14 in 2014, I went through the entire thing barely ever interacting with another human.

Maybe it was the lockdown blues or having a particularly rough time in general throughout 2020, but something changed when I came into the new year. I wasn't enjoying games as much as I used to—I'd stare at my backlog, games I'd wanted to play for years, and not feel motivated to dive in. Singleplayer games just weren't hitting like they once did. Then in January, a university friend asked if I wanted to play Monster Hunter: World with him and some of his pals. I'm partial to a monster-bashing or two, so I agreed.

It sounds a bit hyperbolic to say that a simple offer changed my relationship with games, but nobody ever told me playing with your buddies could be so damn fun. I went from becoming detached from my hobby to looking forward to logging on after work, hopping in a Discord call, and seeing where the night took me. Playing with friends has also helped bring me out of my comfort zone with different genres—I threw myself into shooters like Overwatch and Rainbow Six Siege and played my first ever Halo game this year. I even ran through a bit of Dark Souls with a couple of friends, a game I would've never considered touching otherwise. I dove back into games I'd previously played solo, like Genshin Impact and Minecraft, which turned out to be way more fun to run with other people.

Why AFK in Limsa when you can AFK outside your pal's house? (Image credit: Square Enix)

Then a few months ago, Final Fantasy 14 confronted me again. I'd decided to rejoin it with my Genshin buddy, as I'd never played it with good friends before. Having us both relearn class rotations, fumble our way through dungeons and trials, and complete expansions together is honestly the most fun I've ever had playing a game. I eventually transferred servers, copped an invite to my friend's guild, and found myself with a fantastic group for Endwalker—people I never would've met and befriended otherwise.

I haven't written off singleplayer games. I still need my occasional fix of convoluted god-killing JRPG goodness, after all. But hanging out with my friends in various virtual worlds has afforded me so much respite in what's proven to be an incredibly difficult year. And now that I've left university and taken up working from home, it's proven to be a great way to stay in touch with my pals who live all over the country, as well as make new ones from all corners of the world. I know—"woman discovers playing games with your friends is fun, actually" is a tepid take. But it's had a huge impact on me this year, and I can't see myself going back to my old gaming ways. With 2022 promising a buttload of releases, I can't wait to see what dumb shit I get up to with my buddies in the next year.