AMD details its next gen AM5 socket 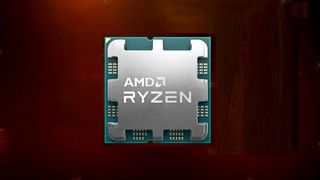 During its CES 2022 presentation, AMD teased its upcoming Zen 4 CPUs which add PCIe 5.0 and DDR5 support.  It also detailed the accompanying AM5 socket. The new platform is due for release in the second half of 2022. Of course, this means the venerable AM4 socket will finally be superseded.

The biggest physical change AM5 brings is the switch to a Land Grid Array CPU socket (LGA) with 1718 pins. AMD will say that things like improved signal integrity are the reason for the shift, but it's just as likely to be for manufacturing reasons. As a user of AMD and Intel platforms going back many years, I found it easier to bend a CPU pin than a motherboard one, so this change is one I’m personally happy to see.

Importantly, AM5 retains AM4 cooler compatibility. This means that your current cooler will stay relevant for many years to come. It avoids a situation like we saw with Intel’s LGA 1200/115x coolers which require an adapter to use with the current LGA 1700 socket. Though compatibility isn't absolute. The money saved by not having to buy a new cooler will be welcomed by all as we deal with ongoing shortages and price premiums.

AM4 isn’t dead yet though. The upcoming 5800X3D will retain AM4 compatibility and it’s possible that AMD will reveal 5900X3D or 5950X3D models at some point in the coming months too.

Socket AM4 made its debut all the way back in September 2016, prior to the release of 1st Generation Ryzen. The strength of the platform is its long life and wide compatibility across vastly different CPU architectures and topologies. However, this can also be a weakness, as the huge number of AM4 CPUs released over the course of almost six years means that BIOS capacity limitations prevent universal forward and backward compatibility, which can cause confusion. It’s likely AM5 will have a similarly long life, and we hope that motherboards will incorporate a larger ROM to accommodate a hundred or more future CPU models.

When Ryzen 3000 series CPUs were introduced in mid-2019 they introduced an architectural change, a process shrink, the introduction of PCIe 4.0, and fundamental shift to a chiplet design. Any one of those things could have been reason enough to change the socket. One wonders just how much of a limitation this was. It was a pretty amazing technical feat.

2022 is the year we say goodbye to AM4. Even though it will officially be superseded, AM4 CPUs will be chugging away in PCs all over the world for many years to come.