Beyond its epic battles and intense gunfights, the Battlefield series has built an incredible reputation for delivering a premium audio experience. From the accurate reproduction of weapon fire to the crunch of gravel under your boots, it’s one of those most intensely auditory gaming experiences you can play today – I recommend you get yourself a good set of headphones when you play if you haven’t already done so.

Its soundtrack has also come to be familiar to players, and its “Battlefield theme” always seems to find a way to live rent-free in my mind with each new iteration. Battlefield 2042 ’s soundtrack, however, feels like a production on a level that we’ve never heard before – and frankly, I think it’s amazing. There’s this physical, harsh texture running through each track that complements the on-screen chaos of battle like never before.

To learn more about its composition and its unique arrangements, we spoke with Hildur Guðnadóttir and Sam Slater, the composers of the Battlefield 2042 soundtrack, to learn more about the work that went into one of the year’s best video game scores.

One of the things I appreciate about the Battlefield 2042 soundtrack is that you can practically feel the music: it’s very metallic, organic, and even harsh – my mind conjures images of rusted metal drums, coarse sand, and the texture of a bass guitar string on several tracks. How did you arrive at this “texture” when sitting down to start composing the game’s soundtrack?

When discussing the sound-palette for Battlefield 2042 we asked ourselves “What kind of world is being built?” The world of the game is futuristic, but that future is close enough to our current world that the sound must feel rooted in our current reality. This meant no laser guns and shiny synths, and no nostalgic orchestras to romanticize and distance the player from such a brutal world.

How did you enjoy the process of composing a soundtrack for a game as opposed to working on a film? Were there any aspects that turned out to be more, or less, challenging than you expected?

Working on a game was a deeply enjoyable experience. More often than not, the visuals of a film are locked, and the music is added towards the end, and this leaves less space for intertwining the visual and auditory landscapes. They can be symbiotic, as we hope our recent project “Chernobyl” was, but often our eyes and ears exist in parallel. With a game, we don’t see the final graphics until its finished, and therefore we are constantly working with ideas, concepts, and impressions of the worlds that are being created. This creates immense dialogue and collaboration between audio and graphics and allows one to really explore the potential for the lines between music, sound effects and the visual world to collapse into a single, living environment. That being said, creating that cohesion is hard! It took us 18 months to make this score. 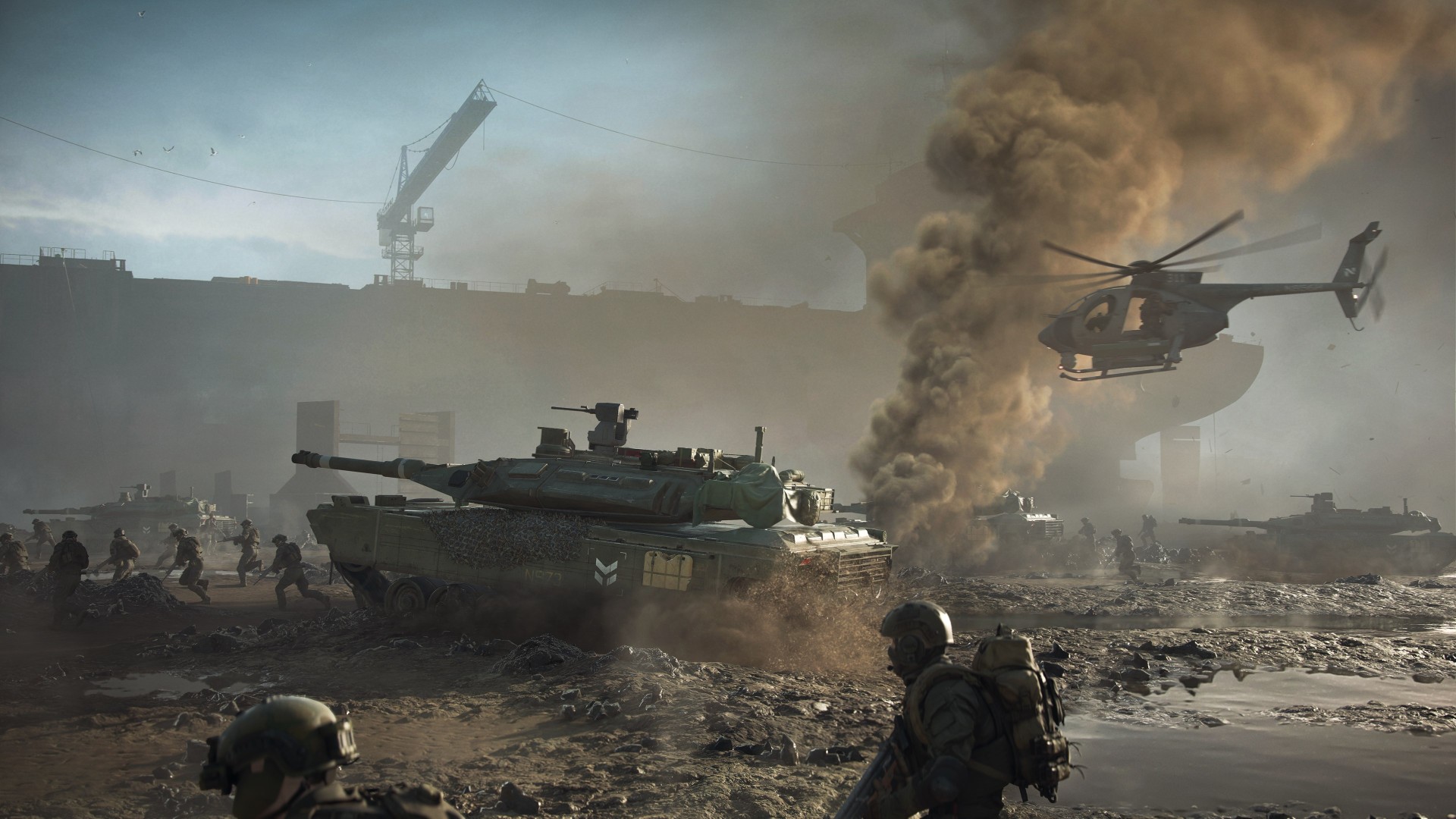 Your work on the “Chernobyl” soundtrack is fascinating, in that you created sounds from a real nuclear power plant in the composition. Being that Battlefield 2042 doesn’t have a “physical” space in that sense, could you share how you went about discovering the soundscape for the game? What was that creative process like?

We looked at the materials of the maps themselves and used the main materials in each location to inform the sounds we made. If the environment was mostly sand and glass, then we made instruments and processes that were using these materials. In this case it might have been a feedbacking speaker cone being covered in sand, or the highest frequencies of shattered glass being used to create rhythmic noise.

One of my favorite examples of this is the sound at the beginning of “Wet Bulb,” a track based on the music for a map called Renewal. The map has an interesting dialogue between lush green areas, and very dry arid areas with a molten salt power generator present. We wondered how we could sonically dry sounds out and so we played recordings of sand moving, through a plate reverb to create “wet sand” and then used algorithmic reverb removal to remove the reverb from the sound. The result is a very strange dry sound that sounds nothing like the original file, but creates a very interesting sonic base for such a dry, dry, dry map!

What was the collaboration with the development team at DICE and EA like throughout this process? Did they have an idea on how they wanted the game to sound, or did you have full creative freedom to explore that space and come back to them with your ideas?

Our collaboration was 18 months long and was incredibly exploratory, with DICE and EA being incredibly supportive and encouraging. When we all originally discussed doing the score together, the word that featured heavily was “disruptive.” Steve Schnur, the Head of Music at EA, said he wanted a score like no other and this was echoed by the team at DICE. They really encouraged us to go as far as we could with the ideas, feeling that playing it safe would be a real missed opportunity considering how strong the game is. Hildur and I have great respect for the previous scores of Battlefield and entered into the project knowing that there would be expectation from players to live up to the work of the previous games, whilst also wanting to pull the sound world in a different direction. Over weeks of conceptual discussions about what we could do to bring the environments to life, with EA and DICE in every meeting, the phrase “we can’t do that” was not uttered once! We began gathering sounds with an immense amount of support and knowledge from everyone involved and the result is hopefully both satisfying for die-hard Battlefield fans and challenging and exciting for everyone too.

The iconic Battlefield theme for Battlefield 2042 feels like it was pulled apart and reassembled with the world’s harshest set of tools — I think the result is fantastic, and each time I hear it I catch myself listening for a few of those specific musical cues that I’ve come to know and love. When composing that theme for Battlefield 2042 , how did you know when you arrived at the ideal balance of the sound you were hoping to achieve, while remaining respectful to the legacy of that musical track?

This was one of the real challenges of the scoring process, as the original tune is something that millions of people know and love. We wanted to be respectful of that theme and yet not have it stick out of the world we were creating. To find that balance took a lot of playing around and experimentation to find out what made the original tune punch so hard. Our theme rests on the thunderous bass of a DIY instrument proudly named the “power plank,” and the saturated echoes of the Battlefield 2042 sound world reaching up to create the main melodic theme. We understood that this theme must be unapologetic like the world of the game, and so we pushed it as hard as we could.

When someone listens to the soundtrack for Battlefield 2042 , what is it you’re hoping for them to take away from the experience? What do you want them to feel?

For us, the world of Battlefield 2042 is a strange blend of chaos and hope. The maps are always a balance of manmade structures falling apart, chaotic weather systems and human beings fighting in the middle having responsibility for their environments. We hope that the player feels excited, empowered but also feels a sense that the worlds they are playing in are going out of control.

Thank you Hildur Guðnadóttir and Sam Slater for taking the time to share with us your creative process behind one of our favorite video game scores of the year. Battlefield 2042 is available now on the Xbox Store for Xbox One and Xbox Series X|S. Stay tuned here to Xbox Wire for all the latest news and features about your favorite Xbox games.