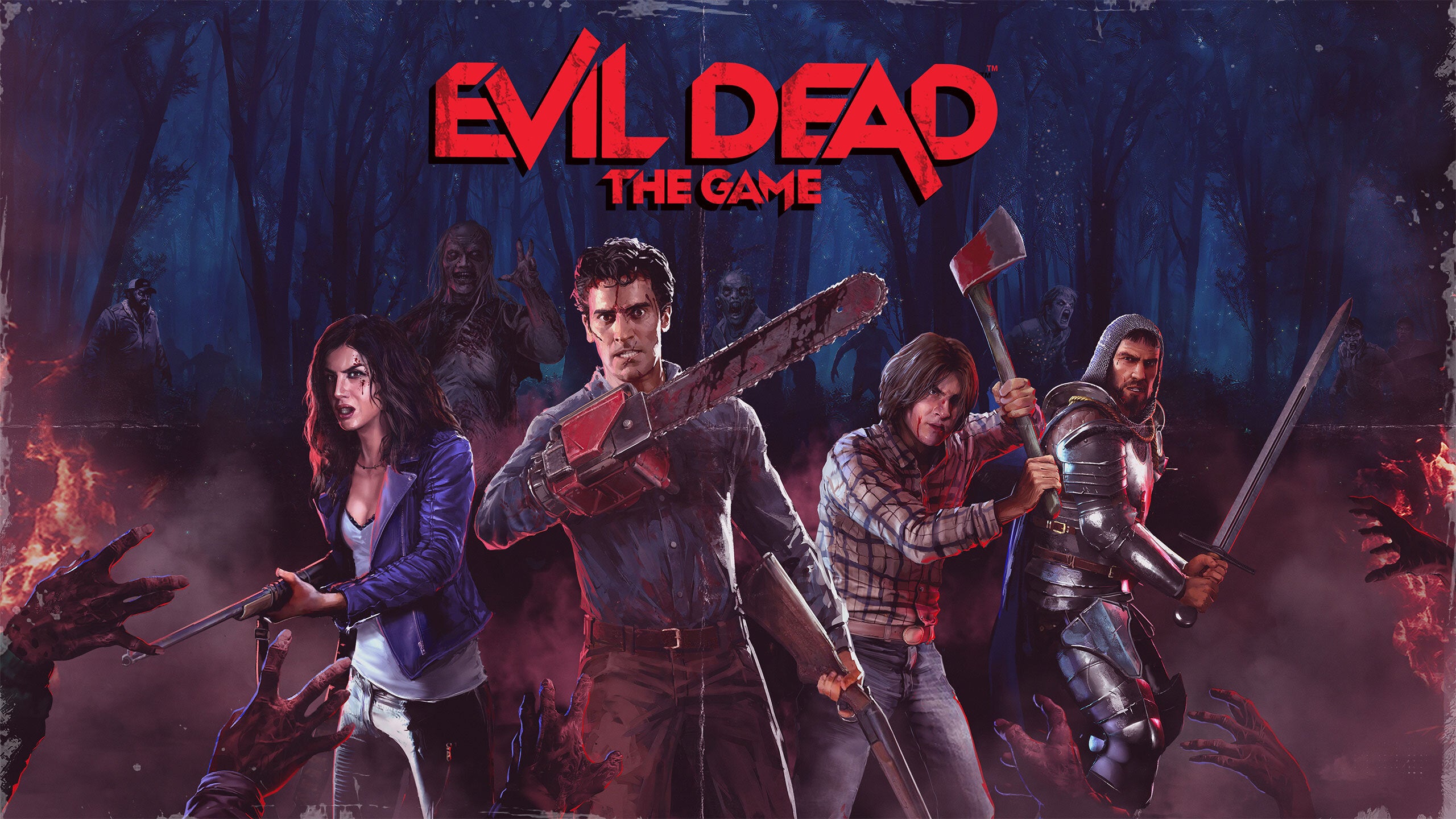 Evil Dead: The Game Review - A groovy gore-fest, but something is missing

Evil Dead: The Game is an affectionate love letter to Sam Raimi’s horror franchise and its mass of loyal fans. I’ll hold my hands up and immediately say that I feel indifferent towards the Evil Dead movies. While I’m a horror devotee through and through, my love lies with the crass nature of Rob Zombie movies when it comes to those delicious horror/camp crossovers. That being said, I have a huge appreciation for the work of Sam Raimi, and was still incredibly interested to see just how the direction of his movies would be applied to an asymmetrical horror game.

A must-play for Evil Dead fans, and still good fun for the rest of us

Despite my interest in the game, my hopes were never that high: the last multiplayer horror game that I played – Back 4 Blood – inspired one of the biggest feelings of disappointment I’ve ever experienced when it comes to games. Yes, really. So this time, despite the two games being very different, I couldn’t help but expect more of the same; they're both horror-focused, multiplayer games coming from developers with patchy histories. You understand my caution, right?

But I was pleasantly surprised by Evil Dead: The Game. It felt as though the title had learned from previous mistakes in the genre, for the most part. There’s also no need to fear that a lack of love for Evil Dead is going to dampen your enjoyment – the game is playable and parseable in its entirety even if you know nothing of Ash and friends; you’re just going to have multiple punchlines fly over your head. 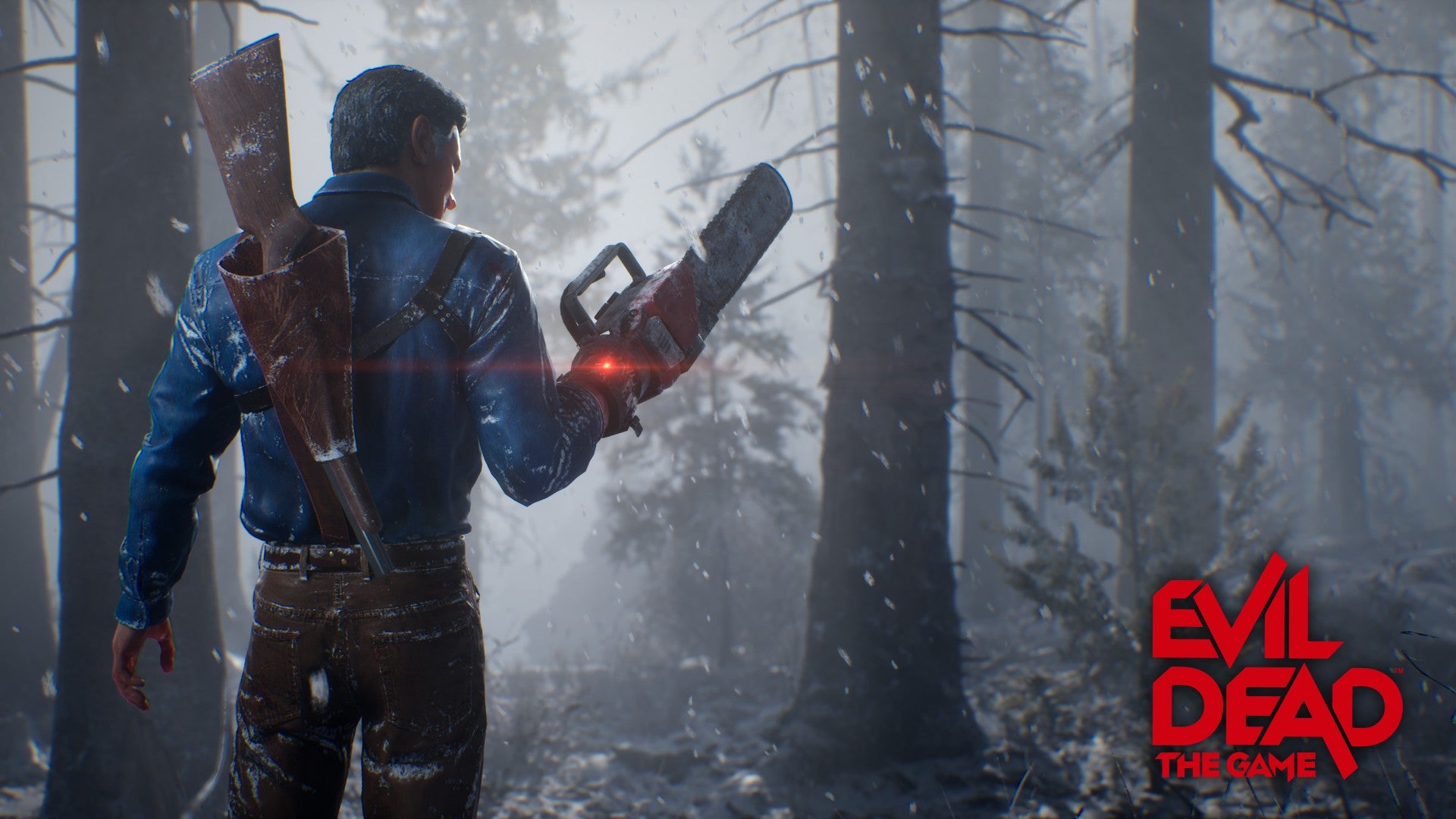 I’ve put hundreds of hours into the likes of Dead by Daylight and Left 4 Dead 2, and my efforts certainly weren’t wasted when I loaded into my first game of Evil Dead (it feels so weird to say that). While it obviously shares similarities with other asymmetrical horror games that require the co-operation of survivors, Evil Dead: The Game remains incredibly fresh in its approach to the genre. Imagine if they gave Dead by Daylight a good soundtrack, easier-to-maneuver UI, and a levelling system for characters that doesn’t take hundreds of hours. Then, imagine if they blended this with the humor, gore, and utter chaos of Left 4 Dead 2. Finally, imagine that the gameplay is absolutely packed with action without feeling convoluted or too complex. What you’re picturing right now probably isn’t too far from what we get here. 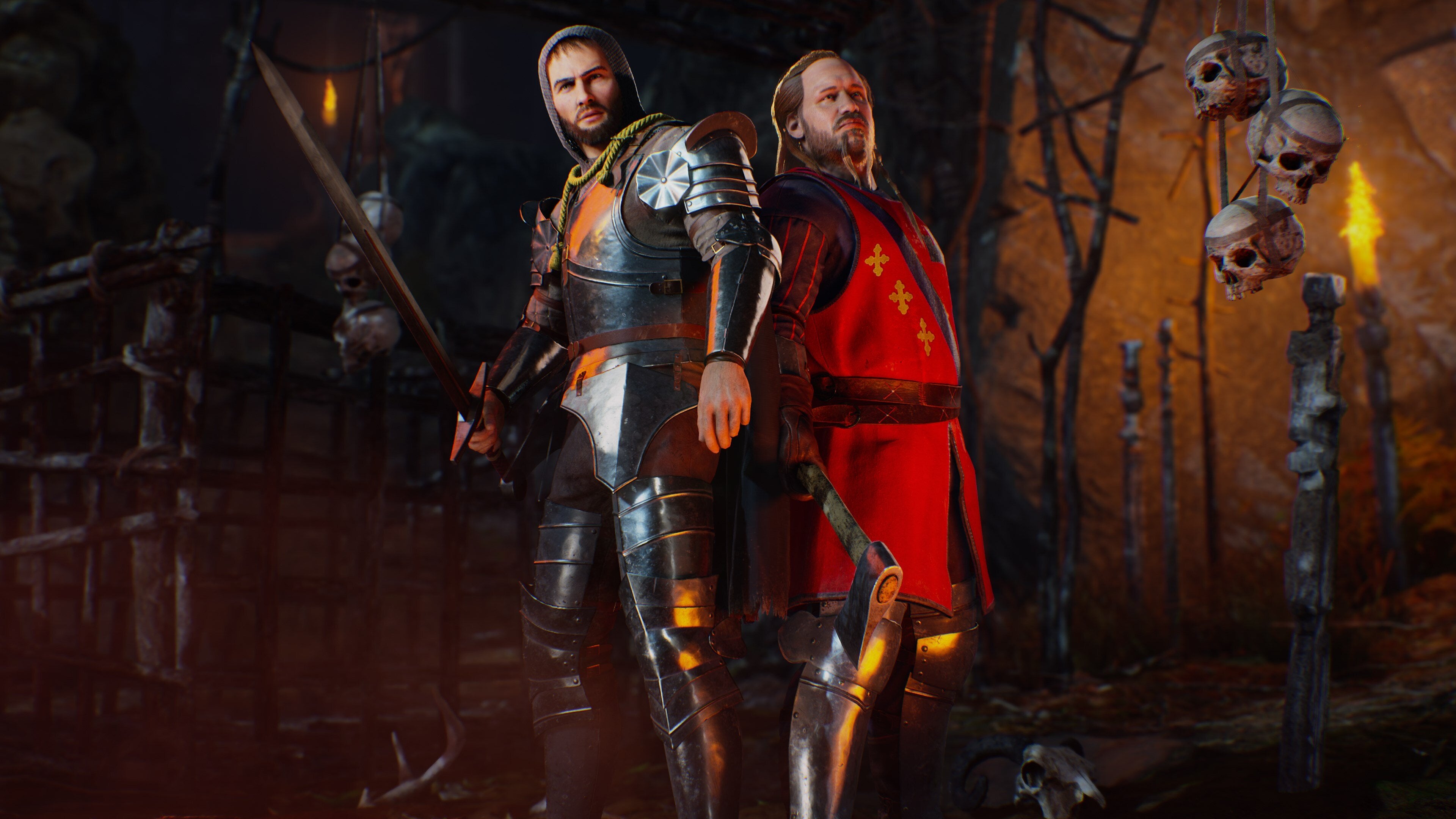 There's lots of stuff for series fans to sink their teeth into.

What also struck me when first opening the game, and later loading into a match, is just how nice it all looks. From loading screens to character models and maps, everything looks impressive – probably the sort of graphics that'll stand up for the entire generation. Jumping into a new map can be disorienting at first (those brilliant weather and lighting effects make sure of that), but you’ll soon find an appreciation for just how much work has been put into making the environments pristine. For further viewing pleasure, scroll through the various menus and just take a glimpse at all the in-game art that there is to discover. These illustrations often display Ash Williams and co. in various situations – ones you might’ve already found yourself in, in-game – and each of them are magnificent.

At first, I was worried that Evil Dead: The Game was going to have too much going on. However, it seems to have struck an almighty balance in terms of having content on offer without leaving you overwhelmed. When you first commence a match as a Survivor, there’s so much to do; not only are you collecting various key items so that you can subdue the Demon, but you’re gathering resources (including Shemp’s Cola and Pink F***), and smashing skulls while working together. As a Demon, you’re roaming the map powering yourself up, micromanaging your units and, later, taking management into your own claws as you get involved in the action. To put it simply, you’re never left doing the same thing for too long, and because of this, it doesn’t feel hard to keep going. Maybe the loop will become boring after several successive hours of trying to relive Ash Williams’ most nefarious moments, but when you’re landing a satisfying, gory finisher on Deadite after Deadite, feeling like a badass reigns superior.

Balancing will prove to be an issue moreso over time 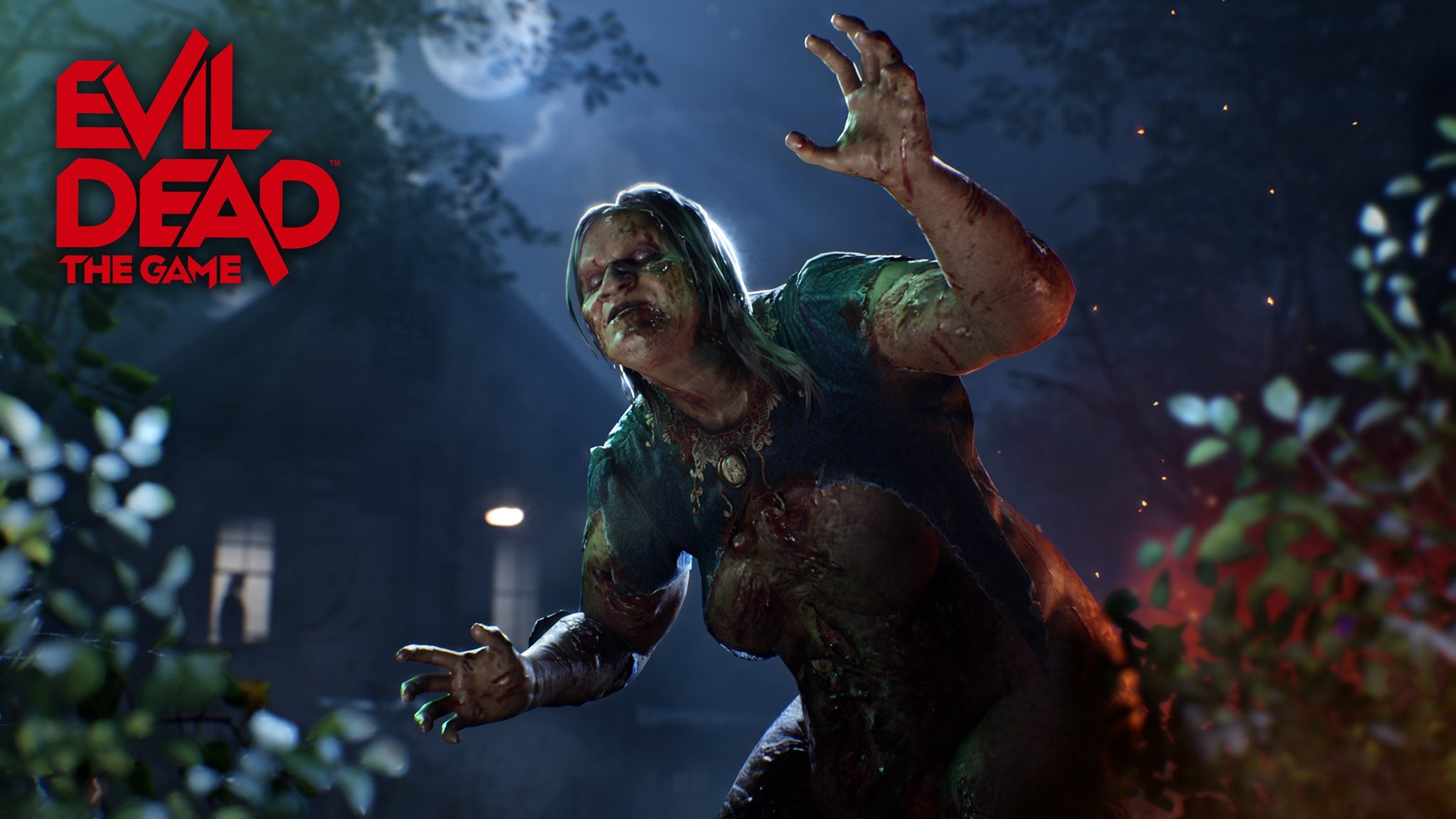 This is a demon warlord. Yes, it's evil.

Evil Dead: The Game is not without its flaws. Having so much to do during a single match can become exhausting – especially without a team of friends to amplify the experience. The gameplay loop does its absolute best, but the race against time to complete objectives will pose issues for some, especially those that are playing as the Demon.

While I primarily played Survivor during my stint with Evil Dead: The Game, I did manage a few games as Demon (and I even won one!), and balancing issues were already apparent. For four survivors, tackling a single Demon can be easy if they’re coordinated. The only reason that I won a single match as a Demon was because someone disconnected halfway through, and Henrietta wreaked havoc on the remaining three during the final few minutes of the match. Yet, I’ve seen the latter happen repeatedly as I’ve approached the end of a match: Demon summons a boss unit, and Survivors will gather around and melee the boss unit to their death. When swarmed with chainsaws, hammers, spears, and more, it becomes near impossible to move to safety and give your boss unit a second chance at life. Playing as a Demon is tough, and I feel that it is intended to have a much higher skill ceiling than Survivor – but this is undoubtedly going to cause more issues as Survivor squads do the rounds. Especially if this game lands in the hands of more casual players that are picking it up for the IP, rather than for a hardcore multiplayer experience.

Balancing isn’t the only issue that might drive a few players to frustration. Evil Dead: The Game is also surprisingly lacking accessibility options. The first thing I noticed is the sensitivity. This can be adjusted in the settings for Survivors, but even at the lowest sensitivity, I could find myself getting dizzy due to my own mouse movements. As for Demons, the deal is even worse; there is no option to change the sensitivity while roaming, nor can you turn off motion blur unless you hop into the game's files on PC.

What I also found to be rather odd from a multiplayer game is the fact that there are voice communications, but there’s no option for push-to-talk. This would’ve been fine for the most part if I didn’t have to listen to one dude munching on crisps for an entire game while giving the team instructions between mouthfuls. Fortunately, you can mute noisier players, but it would be nice to see a push-to-talk option added soon so that we can play matches and communicate without hearing allies eating away or talking to their parents in the background. 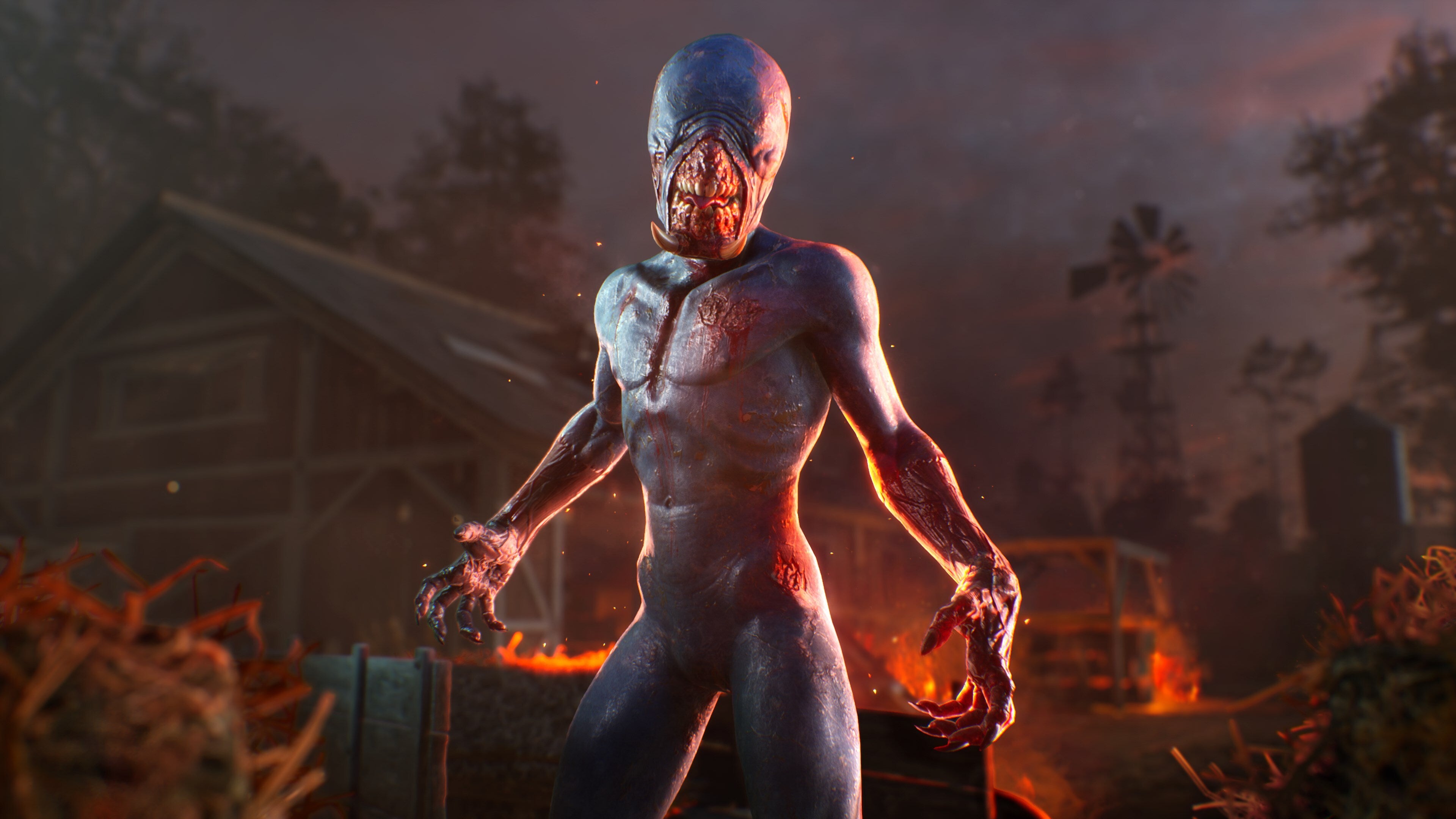 The real demon is in the options.

Accessibility in video games is a pretty big deal to me, so I was disappointed to see basics missing. While the lack of sensitivity scaling and push-to-talk were the biggest issues for me personally, the game also lacks accessibility options for color-blind players, you can’t rebind keys, and you can’t make any adjustments to subtitles or their size. This left me with a sour taste in my mouth on the whole. I certainly hope to see these settings added to the game in future, but launching without them feels incredibly dismissive for players who need these settings available to them. It’s 2022, c’mon.

Evil Dead: The Game is a good time, albeit demanding (it appears single-player missions have everyone struggling), but it truly lets itself down by not having basic accessibility settings available to players. The game itself is certainly impressive in terms of its fresh gameplay and remarkable graphics, and there’s good fun to be had for fans of Evil Dead and Sam Raimi. However, horror fans without an affinity towards the series will likely find more fun in alternative multiplayer horror games, and they’ll probably find more accessibility-friendly games, too.