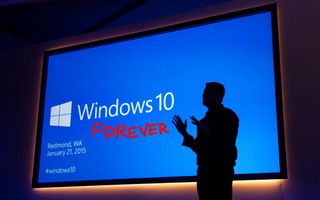 "Windows 10 is the last version of Windows," says Microsoft's Jerry Nixon just ahead of the launch of the then-new operating system. It was a bold statement and now, in the face of the faltering Windows 11 launch, I can't help but wish Microsoft had followed through on that promise instead of giving in to the powerful lure of marketing bull.

It's a quote that was widely circulated at the time, continued to be shared around during the hyped buildup to this year's big Sun Valley Windows 10 update, and then again around the subsequent announcement and launch of Windows 11. Yet chief product officer of Windows, Panos Panay, seems not to have had any idea about it.

When quizzed about why Microsoft had changed its mind Panoy told The Independent: "I was actually asked that question earlier this morning and I had no idea."

"Windows was always meant to be innovation for customers," he says by way of explanation, "like always, it's never meant to be stagnant."

But that's actually exactly what Nixon was talking about with his ever evolving 'last version of Windows' assertion. Yes, a bold statement, and one proven mostly inaccurate given the release of Windows 11, but it was reflective of the prevailing idea of the time, of Windows-as-a-service.

It was the idea that version numbers ought to be irrelevant to the user given the promise of a regular bi-annual update process that would keep this version of Windows at the forefront of innovation.

So yeah, just give me Windows. I like Windows. I don't need a slowly increasing number behind it. Just a functional OS that can consistently keep up with the times, as was promised.

Give me one light update in the spring, and a chonkier, feature-rich update following up in the fall each year—that's what we were expecting to have landing on our desktops come October this year. Code-named Sun Valley, we were going to get a fresh-looking Windows 10 through a major feature update that was going to bring in new functionality, born of the Xbox Series X, as well as a whole new look for the ageing OS.

That would have proven the promise of Windows-as-a-service as, thanks to the increasingly modular design of Windows 10, it would deliver all the best bits of a whole new operating system without all the headaches launching and/or installing a new OS involves.

That's great for Microsoft, it's great for users, but you know who it's not so great for? People who want to sell new systems to punters based on the shiny new thing. I'm not saying the only reason we ended up with the Sun Valley update morphing into a whole 'new' OS was that laptop makers wanted a way to market new machines this year, but I bet there was a conversation or two about it.

At some point Microsoft execs will have taken a look at what the project leads were doing with the original Sun Valley Windows 10 update redesign and thought, 'hey, that doesn't even look like Windows 10 anymore.' Cue lightbulb moment, dollar signs appearing in their eyes, the whole cartoon fat-cat schtick.

'Why don't we sell this as a whole new Windows…'

And lo, the idea of Windows 11 is born. Okay, so there were probably more factors to it than that, like being able to cull promised support for a whole bunch of old PCs, but you get the general idea I'm going for.

But if Microsoft had been brave enough to not give in to the lure of a big launch event, sales of new products, and tons of press about a purported new OS, it could have saved it—and by extension us—a whole lot of trouble. And negative column inches, too.

Just look at the mess it's made of Windows 11 so far. The initial announcement set the stage with new security demands as a minimum requirement for upgrading to the new OS. Confusion reigned supreme as differing messages seemed to be coming out of Microsoft on an almost daily basis regarding its sudden love for TPM 2.0.

There seemed to be a host of unsupported hardware that should have been perfectly fine running an updated Windows 10 that were now being locked out of Windows 11.

Except they actually aren't locked out. Despite threats that Microsoft would be jealously hoarding updates for only the chips on its lists, the first Windows 11 post-launch update has been happily installing on systems with processors well off the minimum requirements grid. Reportedly even single-core Pentium 4 chips.

The confusion doesn't stop there, as Microsoft has now even published its own guidelines around how to skip its minimum requirements checks in order to get Windows 11 installed on your machine. All despite doubling down on them, and claiming that with those system specs it was going to be able to provide an OS that could deliver a 99.8% crash-free experience.

There's also the painful truth that although Windows 11 has been released it's still missing some of the most exciting features we were promised at the outset. Sure we get AutoHDR—for all the good any HDR gaming is on PC—but where the hell is DirectStorage? That's the API which is meant to make SSDs really matter for PC gaming, but it's still lost in developer limbo with no hint as to when we're going to see a game actually take advantage of it.

I like Windows 11, but I would have liked it more had it simply been an update

There are also simple, fundamental pieces of the Windows puzzle that have been removed from the latest OS for no good reason, such as the ability to shift the taskbar around and missing shortcuts. All despite there still being a bunch of settings screens that seem to date back to Windows 2000.

It's frustrating because I like Windows 11. I'm using it right now, and honestly it feels more robust than my alternative Windows 10 installation, which recently has some sort of amnesiac reaction to the SHIFT+WIN+S shortcut I use all the damn time. And for some reason keeps chiming the USB disconnected noise at random intervals.

I like Windows 11, but I would have liked it more had it simply been an update. And I'm pretty confident a bunch of the bad press that has surrounded the new OS would have been avoided if it had simply been a free update.

Features being pushed back in an update are forgivable. Features missing from a whole new supposed launch feels pretty half-baked.

But, with Microsoft still releasing Windows 11 as a free upgrade for Windows 10 users, in the end it's going to feel like an almost identical experience compared with how it would have been as a simple feature update for those of us with happily compatible systems. We'll click on the 'download and install' button in Windows Update, and an hour or so later we'll have a different UI with a centre aligned taskbar, a few extra features... and some missing ones.

So, if the actual experience will be the same, why am I being so pissy about it?

Just because it all feels so utterly unnecessary, and a situation manufactured for a few extra laptop sales, and an excuse not to support older hardware anymore. Not as a glorious new future for PC gaming's top operating system.

And, at a time where there is potentially more competition on the way from a SteamOS that genuinely might rival Windows for the gaming crown, thanks to its primary placement in the upcoming Steam Deck, Microsoft's OS has a lot to prove. And potentially something to worry about, too.