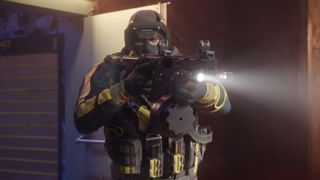 With Rainbow Six Extraction now just a couple of weeks away, Ubisoft has rolled out the full rundown of the PC hardware you'll need if you want to play. Happily for all, the hardware requirements shouldn't shift your eyebrows much, so any recently updated setup should get you into the action straightaway.

That's at the low end of the visual scale, naturally, but that's still running at 1080p, which isn't bad by any measure. Framerates aren't provided, but my assumption is that 30 fps is the baseline. So here's what you need:

The PC version of Rainbow Six Extraction will also support uncapped framerates, multi-monitor and widescreen displays, Nvidia DLSS and Reflex, the Vulkan API, "in-depth customization options," and a built-in benchmarking tool. Crossplay, cross-progression, and cross-save will also be supported across all platforms.

As for what you can expect from the game, Rainbow Six Extraction is essentially a co-op zombie shooter, but a lot less Left 4 Dead-like than you might think: We checked out a pre-release build in June 2021 and found it a "slower, more methodical take" on the genre than we expected. It remains to be seen how that will work out:

"The speed is naturally suited for Siege's close-quarters shootouts, but it feels a bit weird in a zombie game," Morgan wrote in his preview. "Maybe that's why the enemy groupings were so sparse. Normal parasite enemies are about as weak as L4D zombies, but they don't bunch up into hordes. I'd often find one or two in a room standing still, waiting patiently to be shot in the head. It's also seemed like it was possible to completely clear out an area by destroying the parasite-spawning nests scattered around. I was surprised at how often I felt relatively safe in this dangerous environment."