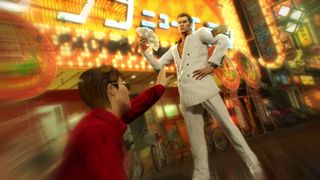 In November of 2021, Sega's Q2 results mentioned the publisher planned to team up with Microsoft to develop cloud-powered 'super games'. What these super games might actually be remained nebulous, but apparently "the amount to be spent on them will be in the range of 10.0 to 15.0 billion yen at most." Given that Sega received a business investment of 100 billion yen, which is about $US865,313,900, that left a fair amount for other projects, which included "investment in new fields such as NFT."

Following the recent hostility to proposals of NFTs being included in videogames, and the questionable 'play-to-earn' models associated with them, it was only a matter of time before Sega would address this. And so, during a management meeting last month, as spotted by Tweaktown, Sega president and group CEO Haruki Satomi did indeed note the "negative reactions" NFTs have received.

"We need to carefully assess many things such as how we can mitigate the negative elements," he said, "how much we can introduce this within the Japanese regulation, what will be accepted and what will not be by the users. Then, we will consider this further if this leads to our mission 'Constantly Creating, Forever Captivating', but if it is perceived as simple money-making, I would like to make a decision not to proceed."

It's hard to imagine how selling in-game NFTs and the entire grotesque concept of play-to-earn games wouldn't be perceived as "simple money-making", and yet other publishers seem eager to embrace them.

Castlevania has NFTs now, and Peter Molyneux's next game Legacy is play-to-earn and all-in on NFTs. Square Enix president Yosuke Matsuda recently said the company has "an eye to potentially issuing our own tokens in the future" even though "I realize that some people who 'play to have fun' and who currently form the majority of players have voiced their reservations toward these new trends". Meanwhile, Ubisoft's NFT scheme has been called "useless, costly, ecologically mortifying" by a French trade union.

Others have heard the reaction and responded accordingly. GSC World canceled plans to incorporate NFTs in Stalker 2 following a backlash, and Steam has banned all games with NFTs or cryptocurrency.