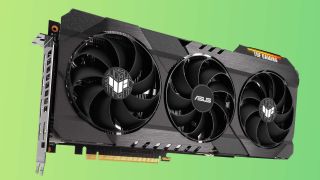 Following yesterday's rumour we had some inclination that Nvidia would announce the GeForce RTX 3080 12GB today, a graphics card with some minor upgrades over the pre-existing RTX 3080 10GB. That has since come to pass, though you could hardly call it an announcement on Nvidia's behalf.

The company has released new official specifications for the new RTX 3080 12GB graphics card on its website, confirming much of what was previously reported. That means a small bump to the total SMs, from 68 to 70; a wider 384-bit memory bus; and 2GB greater GDDR6X capacity.

There will be no Founders Edition for this card, Nvidia confirms to us, which means you'll have to rely on Nvidia's partners to find one. Partners have been quick to market their shiny new third-party GPUs, though, and while we don't have an official Nvidia MSRP for its new card (and may never), we do have some of its partners' starting prices.

Be warned, though, they're not easy on the eyes.

The EVGA GeForce RTX 3080 XC3 Ultra Gaming is the 10GB model, which has been around for a while and shares the same cooler, is listed for $880.

For the RTX 3080 12GB to exist, Nvidia must have seen an opportunity arise from a portion of the GA102 GPUs that Samsung is producing for it. Those that surpassed what was required of the RTX 3080 10GB yet fell short of the RTX 3080 Ti. In doing so, it's also allowed the company, and its partners, to skirt around the original RTX 3080 10GB's sadly missed $699 price tag.

Granted, that's not a price tag you will really find anywhere for the RTX 3080 10GB today, but at least it had meant there were a few out lucky punters out there likely to get hold of one at that price on launch day. And clearly it was holding back some from completely preposterous pricing well in excess of the Founders Edition.

Looking back on the beginnings of the semiconductor shortage, perhaps we'd have never seen the fantastic price-to-performance on offer with the RTX 3080, had it been launched any later than it was. That $699 price tag really was excellent, wasn't it? Truly deserving of being called "****ing great" by our Dave James in his review.

Of course, the missing piece of the puzzle here is performance. That's information about the RTX 3080 12GB we don't yet have available to us. The reason for this, according to TechSpot, is that no review drivers were made available prior to the card's stealthy release, and reviewers would need to wait for the public release to begin testing. So from today that should occur, and sometime soon we'll be able to see what those minor adjustments can muster once combined.