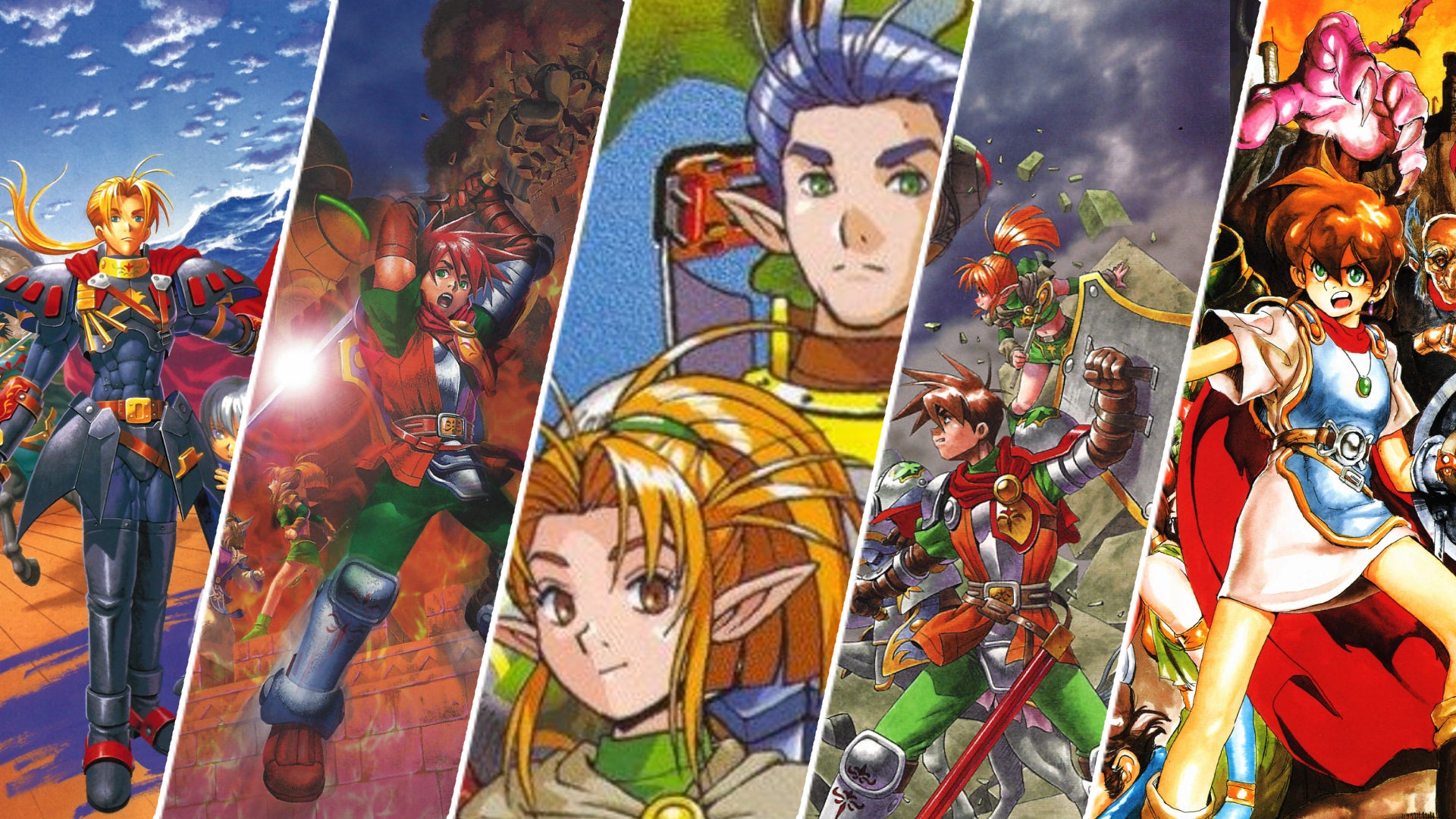 Why wait for another Fire Emblem when you can play Shining Force instead?

Fire Emblem may well have been one of the first, and most famous, tactical RPGs, despite the fact there would be over a decade between the series Japanese and international releases. However, for those of us in the West who fancied overhead wargaming in a fantasy setting, you could do worse than check out the just as good (and slightly more overlooked) Shining Force.

Debuting on the Mega Drive/Genesis, the series was created by first-party studio Sonic! Software Planning (who is often credited as Team Sonic – not at all confusing for Sonic Team), a company which later split from Sega and rebranded as Camelot. Yep, that's right; the same studio behind the Golden Sun series.

Hopefully it won't be long until Fire Emblem, once again, appears in a best games of the month list.

Back when my knowledge of role-playing games was extremely limited and I was only playing because of the draw I felt to elves, centaur knights, and other fantasy tropes, Shining Force was essentially my introduction to the RPG genre – and to the idea of games being much longer form than the quick arcade thrills of Sonic or Streets of Rage that I was used to. Safe to say, though, after renting it from a local video store, it quickly left an impression on me. 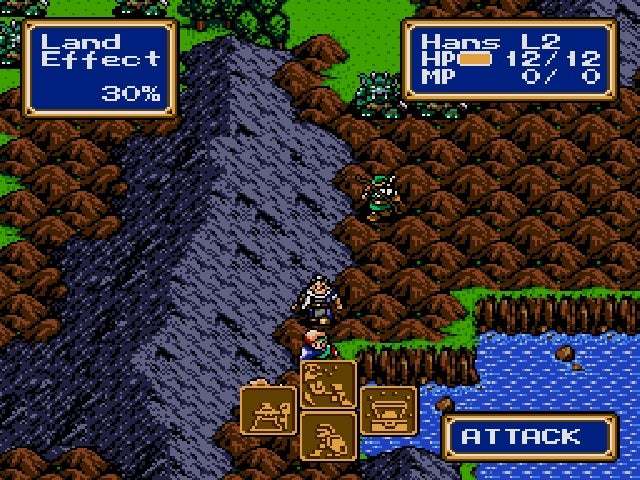 An oldie, but a goodie.

Here’s a game where you begin as a humble swordsman who becomes a leader of an expanding force of warriors. Compared to adventure games like Zelda, you weren’t particularly powerful but you could command your companions across different battle grids, taking your turns to surround the enemy and attack like a much fancier chessboard. I recall, initially, leaving my leader (canonically named Max) in the back and just letting the others get on with it as his attacks were weak and you’d lose the battle if he died.

But then I realised I could have my stronger characters weaken enemies so he could swoop in to finish them off and net the most XP, eventually become a stronger character. Yes, levelling up characters, promoting their classes, upgrading their gear; it all sounds pretty basic stuff now, but this strategic kind of play was an eye-opener to me as I was slowly learning more about what games could be. 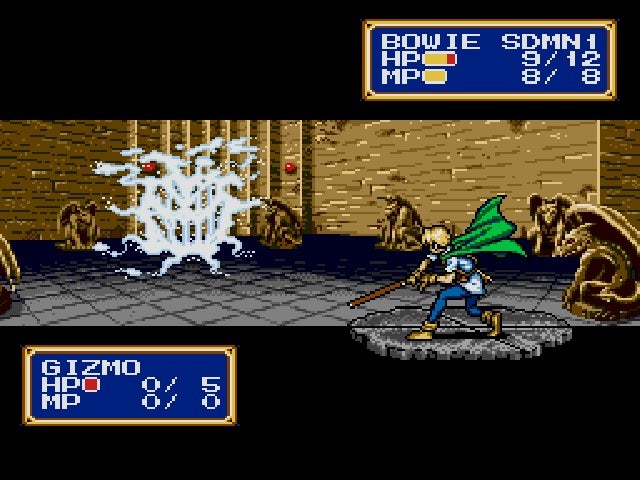 The series evolved quickly, but the older games hold up better.

While Shining Force was pretty much Sega’s answer to Fire Emblem, the two series were also quite different from each other in some key areas. Namely, Shining Force didn’t have the same merciless permadeath as its Nintendo rival. That, and battles were also more like typical RPGs where characters’ turns were determined by their speed. Unlike in Fire Emblem, you weren’t getting to move all your characters in one go before waiting for the enemy to take their turn – and so an opponent countering was an exception rather than the norm. 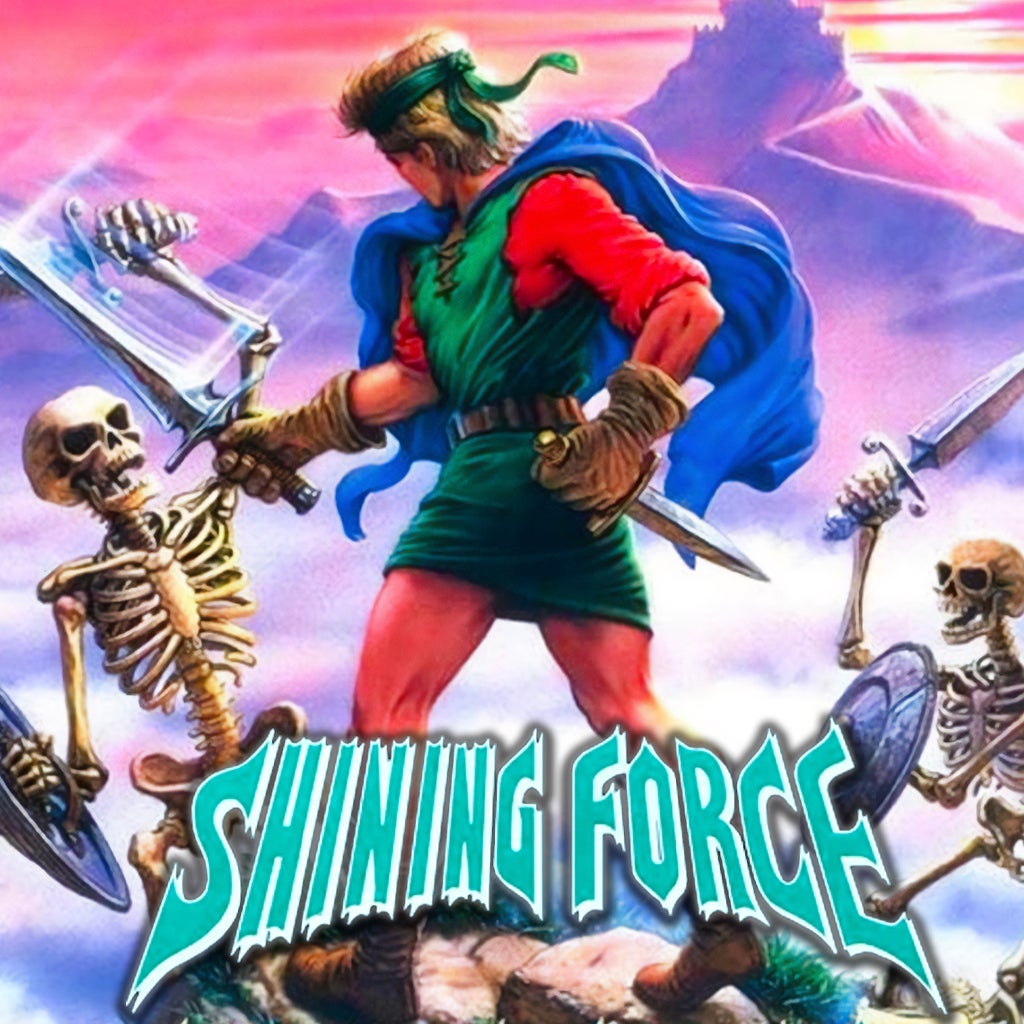 You can't argue with these immaculate vibes.

Shining Force also had better presentation than Fire Emblem – at least in the beginning. There’s the way the action would transition from the top-down grids with fairly simple pixel sprites to more cinematic battle illustrations of your characters making their attack, which were more dramatic to look at. Shining Force also wasn’t limited to just battles: you could engage in other RPG fare, too, like exploring towns on foot, talking to NPCs, and visiting shops to buy new gear and supplies. For a fairly rudimentary RPG, it had a lot of depth.

It wasn't until the sequel – predictably called Shining Force 2 – that I'd see this kind of gameplay system again. The follow-up was simply a bigger, better sequel, with its protagonist having the much cooler official name of Bowie (sorry, Max).

If you played Shining Force when it came the Mega Drive/Genesis library as part of the Switch Online Expansion Pack (with the original game part of the line-up at launch), you'd have noticed that its 16-bit pixel art still holds up very well compared to its dated predecessor, and also featured a larger world where you can freely roam in between battles. 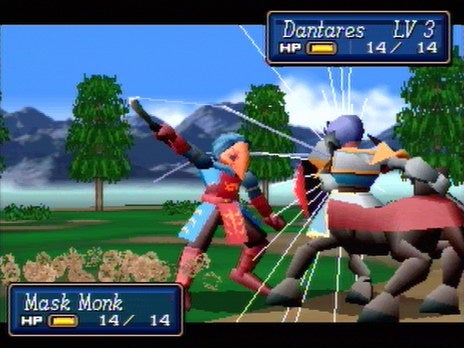 However – as much as I enjoy Shining Force and the not-dated-too-well vibe of Shining Force 2 – the series’ real crowning achievement was Shining Force 3. This wasn’t just a game, but an epic intertwining trilogy that was quite unlike anything else at the time. At, honestly, since. I suppose it’s comparable to the different paths you can take in Fire Emblem: Three Houses, except this was a cohesive overarching story rather than splintered into what-ifs.

Set during the threat of war between the Republic of Aspinia and the Empire of Destonia (with both actually being manipulated by religious cult the Bulzome Sect), the first scenario had you playing as Synbios; a young lord from Aspinia. In the second scenario, you play as Medion, a prince of Destonia. You’ll see the same plot from different perspectives, or get a hint of a battle happening that then plays out in the other scenario, or you might save a character who then becomes recruitable in the next one. It's smart, and it knows it's smart. In both scenarios you also encounter a mysterious redheaded swordsman, called Julian, who actually emerges as the true protagonist in the third scenario – and its this flame-haired firebran who unites the other two forces in order to take on the real big bad. Not bad for a game that came out in 1998, right? 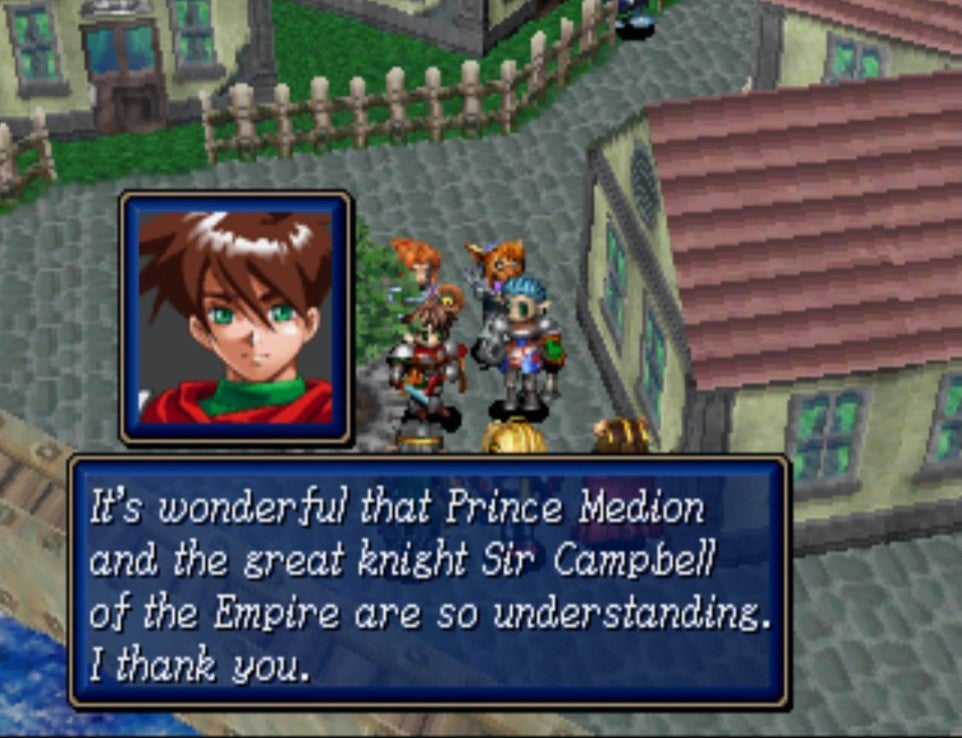 Then there’s the battles themselves, which saw the series transitioning to 3D, but still using character sprites in an isometric perspective with a rotatable camera. T%he action sequences would utilise full-blown polygons and effects to show off attacks and spells. While battles were essentially about defeating the enemy or beating the boss, the maps themselves were full of drama; whether you’re fighting between oncoming trains on a railtrack or against another army over a rickety bridge, there was always some element of danger to keep you on your proverbial toes. You could even discover secret ruins and then send off a few units to beat the thieves to the loot inside!

It’d be no surprise if you’ve never heard of this epic trilogy before, because the West never actually got to experience Shining Force 3 as envisioned. Released during the summer of 1998, it was among the very last releases for the ailing Sega Saturn in both Europe and the US (by then the second scenario had already released in Japan, with the third released later that year) and so we only ever got the first part, with a last-minute edit that tries to tidy up the cliffhanger at the end of Synbios’ campaign. 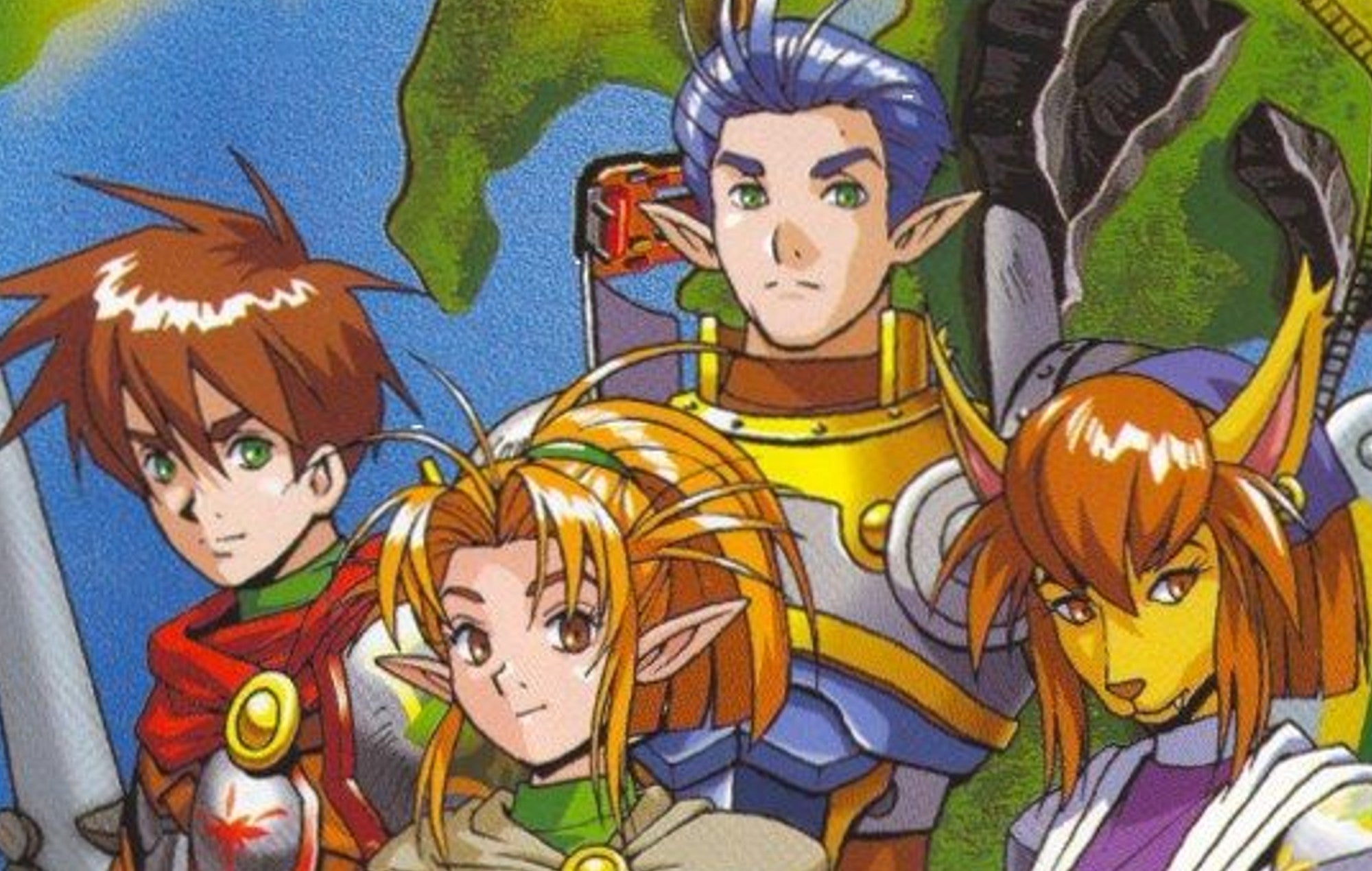 High fantasy, and a high watermark for the Sega Saturn.

For many years, wanting to know what happened afterwards had been something of a Holy Grail. Fortunately, I also discovered a couple years ago that a fan translation exists, which is still being revised and improved to this day by folks from the Shining Force Central community. If you’re prepared to get into emulation, it’s actually possible to experience the entire trilogy translated in English. It's a tricky endevour, but one that's certainly worth your time.

Of course, I’d rather Sega would just listen and give us an official localisation and remaster of the whole Shining Force 3 trilogy, which I’d be more than happy to slap down big bucks for. It’s hard to see that happening though, given that the Shining series has since pivoted away to more action-oriented anime RPG fare such as Shining Resonance Refrain. Original developer Camelot has also not been involved in RPGs for many years now, and these days is better known for the Mario Sports titles. 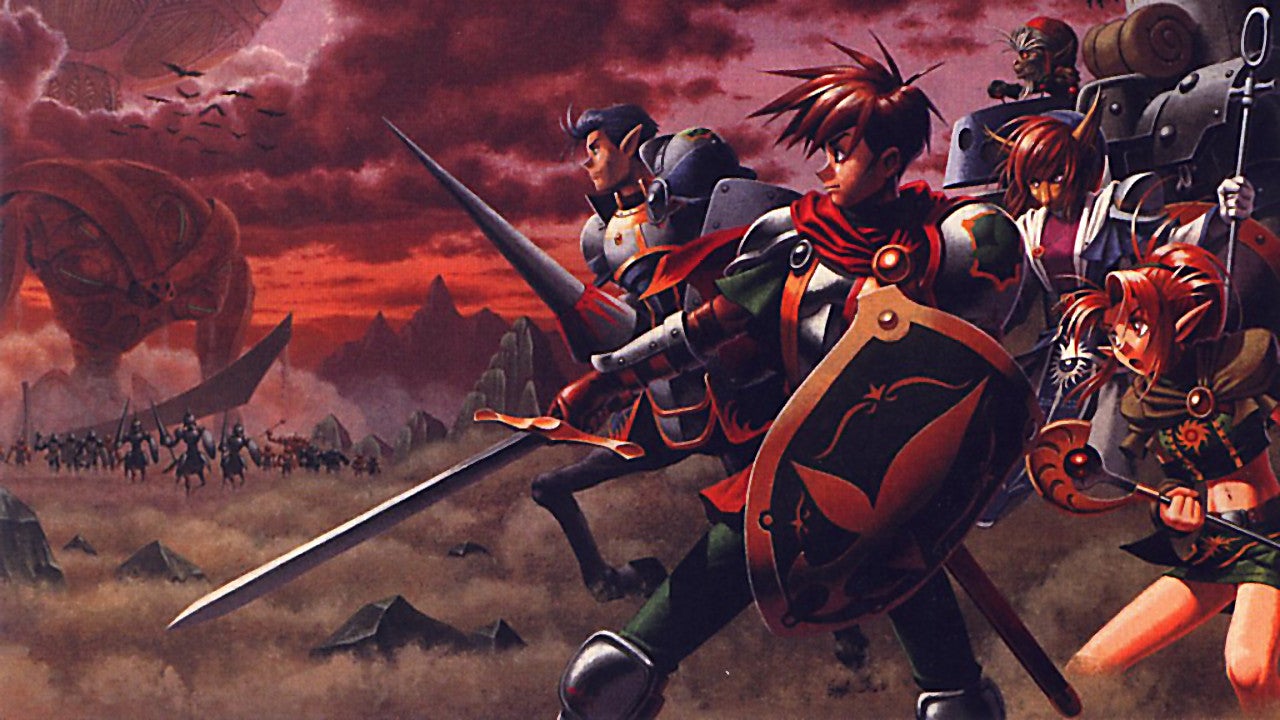 Fight on (on Nintendo Switch) today.

Nonetheless, I believe there’s still a soft spot for the Shining Force series. After all, the recently announced Mega Drive Mini 2 has confirmed one of its titles will be Shining Force CD, an acclaimed remake of two Shining Force titles from the Game Gear.

We know that reviving and remastering dormant IP is part of Sega’s business plan, and if it’s seen the success of Fire Emblem and Square Enix’s excellent Triangle Strategy, then it’s clear there’s still a good appetite for tactical RPGs. In the meantime though, if you want to get Sega’s attention, then playing the Mega Drive/Genesis Shining Force titles on the Switch isn’t a bad place to start.