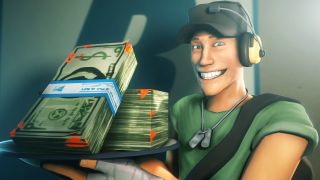 Tragically, NFTs don't look like they're going away anytime soon. What started as a (very flawed) pitch to help digital artists sell and protect their work has now become a mess of hideous apes, Elon Musk memes, beloved artists reanimated from beyond the grave ( twice! ) and climate catastrophe, all wrapped in a dangerously speculative market where high prices are driven largely by a small group of people buying and selling the same tokens amongst each other .

Earlier this year, I compared crypto art to the Steam marketplace , and it's not a coincidence that there are such strong similarities. While Steam has since noted that it doesn't want cryptocurrencies or NFTs on its store , Valve laid the groundwork for a barely-regulated market of investment jpegs when it launched Steam's Community Market back in 2012.

Let's be clear—markets for trading in-game items have been around for as long as one player has been able to give their sword to another. The Steam Community Market was a response to underground trading that was already happening in games like Team Fortress 2.

Those grey markets were largely built on trust, which meant scams and outright theft were common. As we reported back in 2012, fraud was rife , helped in part by an entire economy of "refined metals" (an in-game item that could be used to craft weapons and hats) and plain white earbuds—which, as a time-limited promotional item for the game's Mac launch, became highly sought-after.

Steam helped legitimise this market, bringing it under official control and adding security to real-money payments by facilitating them through Steam's payment process. But it also formalised a community that had been simmering for years—a culture that used idle servers and trawled games with promotional items to increase their digital hat investment portfolio.

That said, Steam's own market wasn't safe from fraud. TF2 was eventually supplanted by Counter-Strike: Global Offensive as Valve's most popular online shooter, in part because of its cosmetics economy . A 2019 Guardian report tied "nearly all" trading taking place in that game to money laundering efforts, and with CS:GO skins sometimes selling for thousands of dollars, a controversial skin gambling scene began to develop around the game.

It's hard not to make comparisons to NFT markets, where "pumping and dumping" and straight up art theft (whereby NFT sellers nick and resell art without consent) is common. As the Steam Community Market has grown, Valve's learned it needs to take a more hands-on approach to keep fraud off its platform—a kind of increased regulation the decentralised world of crypto is fundamentally opposed to.

But forget the scams for just a second. What about the promise of crypto gaming? Of the idea that an in-game item is truly yours, to keep, to buy and resell as you see fit? This is frequently touted as the way crypto will change gaming.

How quickly the world forgot about Artifact.

I actually quite liked Artifact at launch. A card game adaptation of Dota 2, it saw you fighting across three boards with both hero cards, minions and abilities arranged around Magic The Gathering-style colours. It could be overwhelming, and often unfair, but it was a fascinating translation of the behemoth MOBA.

The problem is that Valve wanted Artifact to be as much a market as it was a game, with every card listed on the Steam Community Market. In theory, it worked just like a physical card game—you buy starter packs, booster packs, and then head to a secondary market to pick out individual cards.

In practice, the best hero in the game, Axe, was selling for more than the game itself. Physical card decks could be borrowed from friends, passed down when you're done, and give you a nice stack of physical goods to shove in a drawer. Putting together an Artifact deck wasn't ostensibly more expensive than opening hundreds of Hearthstone packs, but on top of a pay-to-play model that further asked you to shell out to enter any mode that rewarded further cards. It felt like a game that demanded too much of your money to simply get by.

It was too much , and now Artifact is dead.

It is also exactly the model crypto chuds want to see popularised. A widely-mocked Bloomberg article imagined a version of Mario Kart where only one person could own Mario, and that Mario is faster and better than every other character. Because Mario is the fastest, he earns money faster and will sell for more when his owner gives him up, letting a new investor buy the best character in the game for exorbitant fees.

This is miserable! In games we've long damned the idea of pay-to-win, and now an entire ecosystem is trying to barge its way into games with exactly that offer. For these people it isn't enough for a game to be fun, or demanding, or emotionally resonant—it needs to have a financial incentive, investment value. It needs to be, in short, a job.

The go-to example of an ideal crypto game right now is Axie Infinity, a Pokemon-style game that as of August requires a buy-in cost of over $600 just to play—promoting "scholarships" that let (often impoverished) players "rent" accounts from wealthier players to earn crypto, giving a significant cut to their "managers". It's digital landlording, one that has turned the game into a form of work for a growing audience in the Philippines .

Steam didn't invent the idea of bringing real money transactions into video games. MMO gold farmers and the Diablo 3 auction house scandal all play into the tensions between money and time, work and play, and how much of either we can afford to put into our hobbies. But Steam absolutely helped popularise the idea that digital jpegs could be worth thousands of dollars.

The closest Steam has to straight-up NFTs are trading cards, the majority tied to a specific game with monetary value assigned by how willing folks are to snap up these artificially-scarce jpegs. They're the end point of weapon skin trading, pure investment with no purpose in-game, only useful for levelling up your Steam profile. In the early days, they could be worth a pretty penny, and some companies even spun up fake games , using bot armies to idle in them and generate thousands of profitable cards.

But at this point, they're chaff—almost entirely worthless, flooding the market with quite nice pictures only the most committed will ever care to collect. Seeing how useless cards have become paints an almost optimistic picture for the future of NFTs—a reminder of how utterly inconsequential these hideous high-value algorithmic monkeys will be in 10 years time.

Nevertheless, NFTs are slowly making their way into games. Ubisoft is shilling kneepads with unique serial numbers while Peter Molyneux tries to reinvent company towns on the blockchain . Even Stalker 2 tried to get in on it this week, announcing that whoever owns a specific NFT by a certain date will be immortalised as an NPC within the game, visible to every player as "that tosser wot spend loads of cryptocurrency to wear a gas mask in digital Chernobyl".

But disgust at NFTs has become an almost unifying force for gamers of all persuasions. Intense backlash saw Stalker 2 backtrack on its NFT plans within a day of announcing them. Earlier this year, Discord similarly rolled back crypto plans after an overwhelmingly hostile response saw a significant drop in Discord Nitro subscriptions.

How long will Steam hold to its NFT-free word? It certainly hasn't delisted Dead By Daylight, which heralded the arrival of Hellraiser's Pinhead with a nonsensical horror-themed NFT . Steam has an inherent goodwill among PC gamers, but it's a goodwill that's allowed them to avoid criticism for things like popularising loot boxes with TF2 crates.

Steam might have laid the groundwork for NFTs, but that's also put it in the unique position of having seen how this whole crypto mess might play out over a years-long timeframe, so it might know better than to jump aboard the bandwagon. Even if the ethical concerns don't put Valve off, why would it want to play host to a marketplace it can't control?

20 years ago, Nat played Jet Set Radio Future for the first time—and she's not stopped thinking about games since. Joining PC Gamer in 2020, she comes from three years of freelance reporting at Rock Paper Shotgun, Waypoint, VG247 and more. Embedded in the European indie scene and having herself developed critically acclaimed small games like Can Androids Pray, Nat is always looking for a new curiosity to scream about—whether it's the next best indie darling, or simply someone modding a Scotmid into Black Mesa. She's also played for a competitive Splatoon team, and unofficially appears in Apex Legends under the pseudonym Horizon.