The 6 most ambitious Fallout mods in development right now 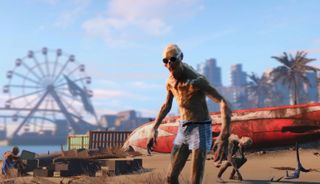 The Fallout series has taken players through the post-apocalyptic remains of Washington D.C., Vegas, California, Boston, and the hills of West Virginia, but there are still so many places it hasn't gone. You can’t lie on Miami Beach and get a (radioactive) tan, visit the top of Seattle’s Space Needle, or enjoy the pre-Bethesda Fallouts in full 3D glory. But modders are working to change that.

If you’re a veteran of the Vegas strip, blew up Megaton, and even met all of Fallout 76’s Wastelanders, you're in for a long wait for the next Fallout game. Bethesda is currently focused on Starfield, and The Elder Scrolls 6 will probably be its next project. Unless another studio is secretly enlisted to take on the next Fallout, it's at least several years away.

Thankfully, the modding community has ambitions beyond funny randomizer mods and guns that fire baseballs (though those are good, too). These expansive mods promise dramatic changes to existing games, including 'total conversions' with their own stories, environments, quests, factions, and music. There are many new adventures to look forward to in The Wasteland, and we’ve highlighted the most ambitious ones below.

Time in development: 5+ years Estimated release date: None Playable: No

Fallout: Cascadia is a total conversion mod for Fallout 4 set in post-war Seattle. It aims to have new weapons, factions, armor, characters, and its own branching main story. Fallout: Cascadia will take place in 2329, around 40 years after the events of Fallout 4 and over 200 years after Fallout 76. The development team is promising a world "almost twice the size of Fallout 4."

Unfortunately, there’s no set release date for Fallout: Cascadia, and the story doesn’t appear to be finished yet — the team was looking for additional writers as recently as March 2021. Still, the mod’s social media pages and website reveal much work has already been done. Sections of Des Moines, Seattle, Mercer Island, Kent, and Redmond have been added to the game, as well as some original weapons and armor. Fallout: Cascadia even has its own instrumental score.

Even though you can’t play Fallout: Cascadia yet, the team has been releasing some content in the form of independent mods for Fallout 4, including NCR armor and updated Miniguns.

Time in development: 3+ years Estimated release date: None Playable: No

Fallout: Miami is one of the most-anticipated Fallout 4 mods right now, set in the ‘Vacation Wasteland’ of former Miami Beach. It will feature two primary factions: the “nomadic, automobile-worshiping” Nuclear Patriots and the Fallout franchise’s favorite baddies, the Enclave. The mod will also have its own ambient soundtrack.

There’s no release date for Fallout Miami yet, but just like with Fallout Cascadia, the team is releasing some smaller components as independent mods (like the quad-barrel shotgun). Unlike some other total conversion mods, Fallout Miami continues the story of the Sole Survivor from Fallout 4, making it more similar to an official DLC.

Time in development: 3+ years Estimated release date: None Playable: No

Fallout 4: New Vegas isn’t exactly a new adventure — it’s a re-imagining of Fallout: New Vegas in Fallout 4. Simply porting the content of New Vegas to Fallout 4’s newer engine would already be ambitious, but the mod’s team is also re-creating most of the game’s art and assets from scratch.

Fallout 4: New Vegas's creators haven't hinted at how far along the project is. Judging by the development time of these other ambitious mods, though, don't expect it to be soon.

There’s no release date yet for the entire mod, but the development team has released almost 20 smaller mods for various weapons, creatures, companions, and workshop items. The scope of the already-released content is much larger than what is available from the other projects on this list, which bodes well for Capital Wasteland making it to the finish line. All that’s left to be released is the complete package.

Time in development: 2+ years Estimated release date: None Playable: No

Project Arroyo is still in the early stages of development, with the goal of reimagining Fallout 2 in Fallout 4’s engine. Fallout 2 was an isometric 3D game, so unlike the remaster attempts for New Vegas and Fallout 3, Project Arroyo doesn’t have a fully 3D environment as a template. The team also plans to implement some of Fallout 2’s cut content (such as an Environmental Protection Agency facility) and completely-new locations.

Project Arroyo hasn’t published much in-game footage yet, nor any trailers, so a release date is likely far off. Still, the early Fallout games would likely benefit the most from a fully-3D remaster, so Project Arroyo is absolutely worth keeping an eye on.

The original Sim Settlements is a fantastic mod for Fallout 4 that overhauls the settlement system, allowing your NPC townsfolk to build their own randomized residential, industrial, or commercial structures. These buildings grow and change over time and don't require you to micromanage every aspect of your settlement, with the result being your settlements real like real, lived-in, ever-changing places.

Sim Settlements 2 expands on this idea, and throws in new characters, quests, and stories, giving the mod a scope far beyond just the little towns you manage.

With compelling personalities and custom voicework for its new characters, it's a staggeringly impressive mod and should absolutely be a part of your next playthrough. Not only does it give you more rewarding and immersive ways to create settlements, the introduction of a storyline gives you a real reason to put in all that work, too. And not only is Sim Settlements 2 a great mod, there are lots of mods for it, as other players have added new locations and layouts you can use. Here's the official site and wiki to help you get started.

Corbin is a tech journalist and software developer, based in North Carolina. He plays a lot of Planet Coaster and Fallout.