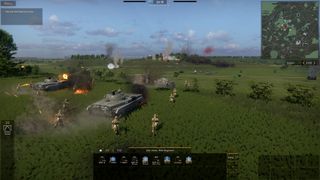 How about a big fat single player campaign RTS about your classic cold war Germany conflict scenario? Regiments is going to be just that when it releases in 2022, with a dynamic campaign about wide-scale warfare in the East-West German border region in 1989. It's a pretty large scale game, intended to let you control platoons rather than individual squads or units, putting you in the role of commanding officer rather than lieutenant or sergeant.

Right now, Regiments is running a beta playtest of its larger-scale Operations mode. Operations are multi-day, large region conflicts where changes to the battlefield and losses are persistent over that time. As the battle advances you'll have to use points to replenish your forces or draw in reinforcements. It's a neat idea, and I like that the wreckage of damaged vehicles or the defensive emplacements you've put up will last between days. Well-placed fighting positions or tank traps might be worth their weight in gold.

There's no tutorial for Regiments, as it's in-development, but there is a nice little temporary manual to read about the operations game mode. The usual warnings for trying out a beta apply, and the developers are pretty clear that sounds aren't final and some GPUs are very far from optimized.

I remember coveting old MicroProse games in the store as a kid. So it's all the weirder to see the recently-revived company up and publishing the exact same kinds of games it was dropping decades ago.

You can play the Regiments playtest on Steam, or read more about it on a Steam blog post. It's scheduled to last until the end of January, so there's no huge rush.