Valheim is my new Minecraft 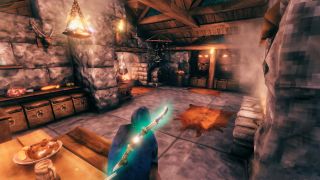 I'll be honest—I've never set foot in the Nether. Minecraft is a game I'll mess around with for a few evenings at a time, building bases or exploring biomes. It's always been something I'll fire up if I'm at a loose end or I've had a particularly stressful day. I can go months without playing, but it's a game I always return to. Or it was until February when Iron Gate Studio's Valheim hit Steam Early Access. Oddly enough, the Viking afterlife now serves as my stress-free virtual retreat.

One of the best things about Valheim—and one that's not immediately apparent if you haven't played it—is just how forgiving it is. There are brutal biomes with lethal enemies for the unprepared, but you can easily avoid those areas if you don't want that sort of challenge. It pays to kill the first boss to access the pickaxe and, by extension, copper and tin as resources, but you can spend all your time building your base and unlocking recipes without going much further than that.

You also won't starve in Valheim. The worst that happens if you don't eat is that your health and stamina sit at their minimum levels, but neither will drop below a certain point—unless you take damage, of course. It's not a mechanic you'd expect to be missing from this type of survival game. It's even more forgiving than Minecraft's take on hunger, which is pretty chill compared to most survival games.

Before discovering Valheim, I would occasionally build extensive bases in Minecraft, but I spent most of my time in creative mode. I'd start up a new world and fly around in search of villages, and when I found one I liked, I'd start repairing it—filling in gaps in walls, clearing away grass from pathways, and just tidying the place up as the bemused villagers looked on.

Valheim's console commands can be used in a similar way. You can activate god-mode so you don't take damage, or spawn anything from resources to enemies. You can also activate its version of creative mode, which lets you craft things without a workbench or resources.

If you're new to Valheim, I recommend holding off on the console commands for a while. As good as they are, a lot of the magic of Valheim comes from exploration and discovery, and you lose some of that excitement when you turn to cheats or shortcuts.

The magic of Valheim comes from exploration and discovery.

Generally, I like to start a new world with a character that has a decent amount of food and maybe some basic weaponry, and then I'll just run around exploring. I'm mostly on the lookout for villages. And if I don't like the immediate layout of the world or its terrain, I'll leave, delete it, and start again.

I'm pretty sure this habit started in Minecraft because I was looking for that perfect spot for a base, and it's the same in Valheim. I'm not sure I could tell you exactly what I'm looking for, but I know when I find it. I don't find that perfect location most of the time, but that's okay too. Exploring is half the fun—though not so much when you accidentally walk too near the border of a surprise plains biome and get one shot by a Deathsquito in your basic leather armour.

The villages in Valheim aren't populated like they are in Minecraft—unless you count the gross (and violent) draugr—so you don't get the satisfaction of seeing villagers make use of newly renovated buildings. But the villages themselves are often excellent spots for base-building. The area is usually flat already, so you can tear down the basic structures and build your own. The more advanced houses in the draugr villages are often good enough to keep, however, and there's a lot of satisfaction from restoring these to their former glory by simply using the hammer's repair function.

I abandoned my original world, as I was fed up with trolls invading my base and destroying my stuff.

I have a permanent world with a fairly elaborate home. It's the second world I've settled down in—I abandoned my original world, as I was fed up with trolls invading my base and destroying my stuff, like taking out half a dozen of my wolves if one of them managed to get in a lucky swing with a log. And this brings me to the second cool thing about Valheim's progression (or the avoidance of it).

As you start killing bosses, you'll get raids on your base with increasingly challenging enemies. With no bosses killed, these raids begin with boars and necks occasionally charging you down, and these are easily dealt with.

After killing the first boss, Eikthyr, greydwarves from the Black Forest biome will start invading your base, then draugr, skeletons, or trolls after you've killed the second boss, and so on. While not too difficult, these raids become annoying when all I want to do is concentrate on building. Luckily, Valheim has a simple solution: Kill the bosses on a separate world. You still get the trophy and the loot, and you can bring those items back to your permanent world and use them there. Essentially, you reap the benefits of boss progression without the raids. Perfect.

It's not that I won't ever go back to Minecraft—there's plenty to love about that blocky sandbox—but Valheim somehow feels like the grown-up version. Not only does it look great, building is easier, and you don't need to mess around with annoying blocks. Of course, there are some incredible Minecraft servers out there. But I want to make something that looks vaguely passable without needing a degree in architecture. Or to wander around searching for the best place to build the ultimate base. And for both of those things, Valheim is my new favourite survival game.