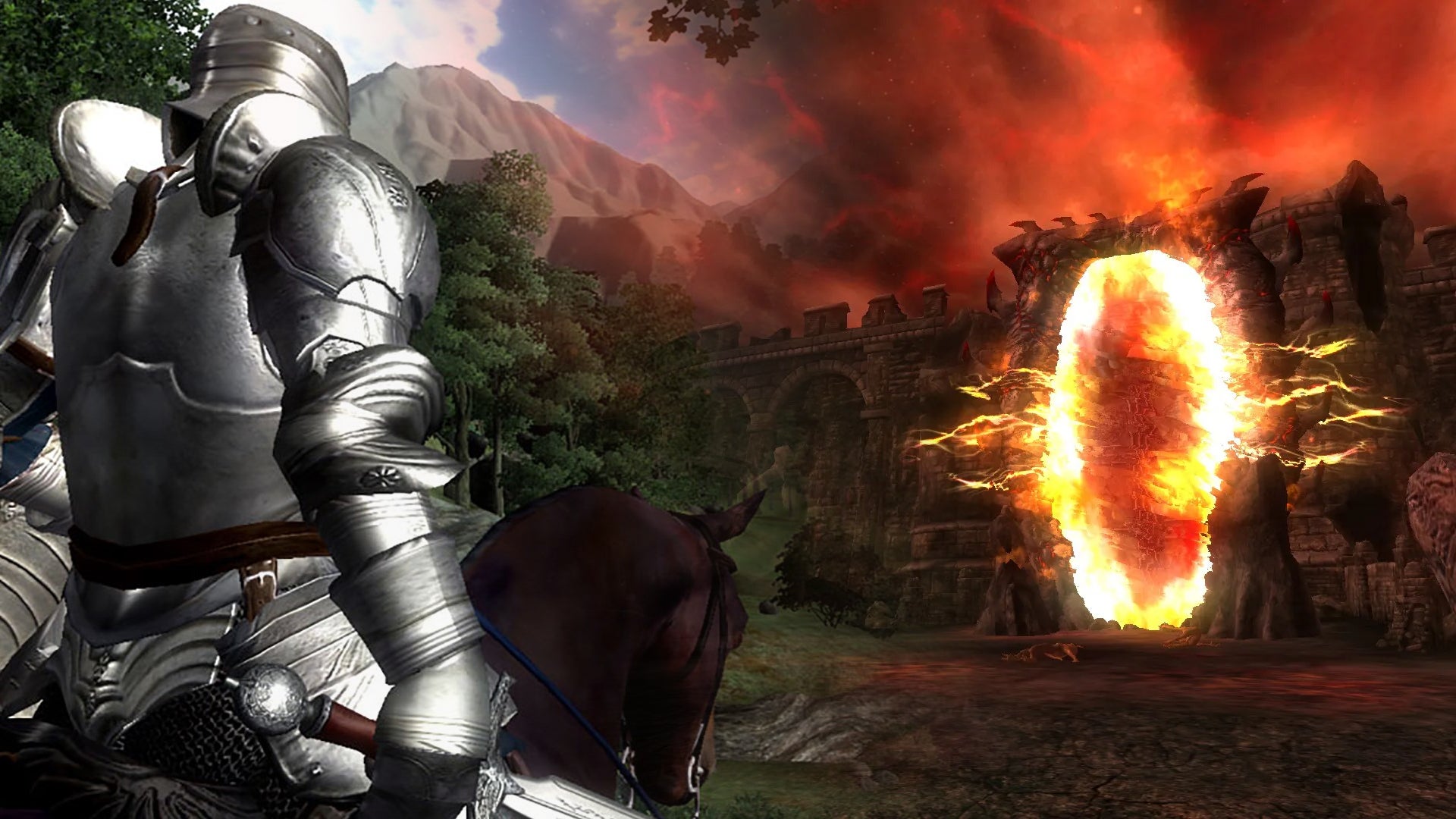 Why does vanilla, mod-less Oblivion still feel this good to play after 16 years?

You don't even need to dress The Elder Scrolls: Oblivion up with fancy patches and upgrades to make it one of the best RPGs ever made.

Right now we’re all sitting on our hands, waiting for The Elder Scrolls 6. Wondering what delights it might hold for us. Whether the NPCs will be able to simultaneously move, talk, and come off like something close to humans. Dreaming of a world full of undiscovered quests, un-plundered chests, pristine sweetrolls.

But the human brain doesn’t sit well with incomplete information loops. It’s difficult to live with the uncertainty of the Elder Scrolls 6 – it might be a terrible pile of wretched nonsense, for all we know. Our subconscious mind wants to solve problems, not simply sit with them.

Can The Elder Scrolls 6 hold a candle to Oblivion?

That’s the best explanation I have for why I installed Oblivion again recently. It’s so far in the past that the memories I have of it are one sugar-coated glossy haze now, more of a fuzzy feeling than a clear sequence of events. It almost feels like a new game, albeit one made from rather rudimentary parts.

I was expecting a nostalgia hit and an afternoon’s fun. What I wasn’t expecting was for Oblivion to hold up on its own terms and enthrall me all over again. 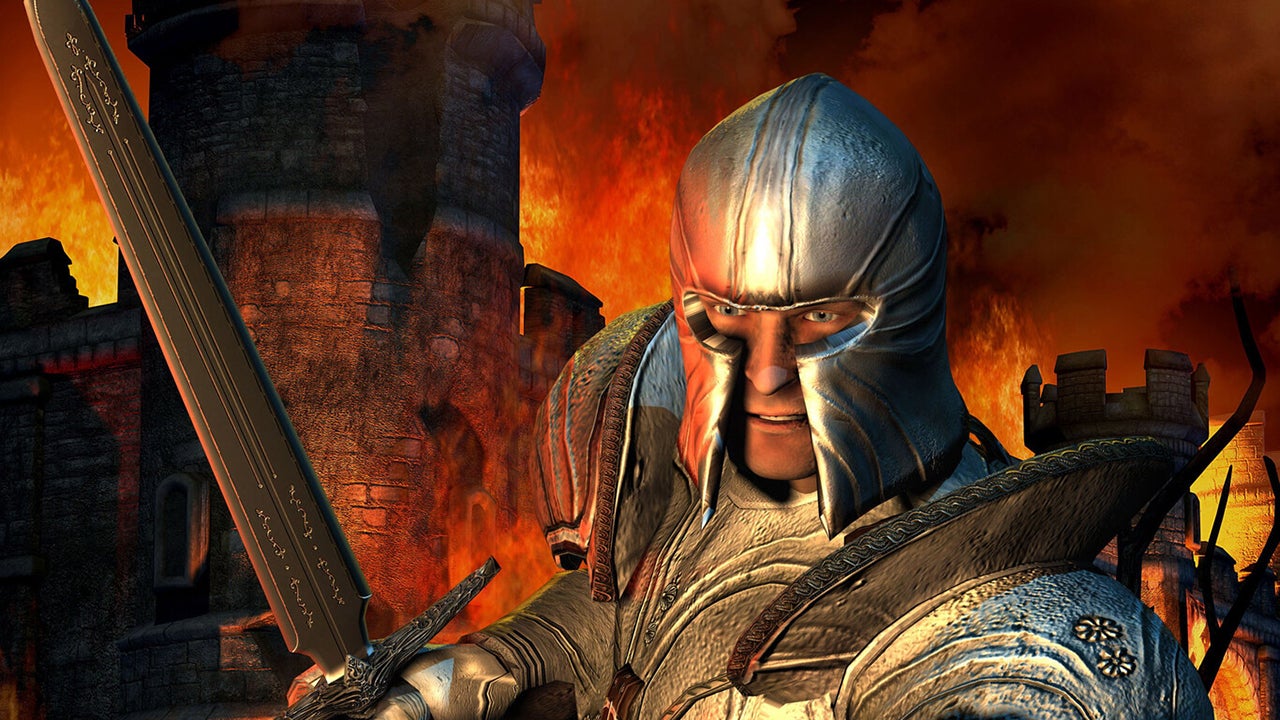 That bit where you emerge from the sewers and see the natural beauty of the world map for the first time – you know, the bit? I’ve written about that moment for so many magazines and websites that it should by rights subdue me into a stupor to actually play the thing. But it didn’t subdue me into a stupor. It made me quite excited.

Even though I knew exactly what was about to happen. Even though I knew every inch of the world map beyond, and all the quests – that one where you’re trapped in a painting, the cult who want to bring back the Deep Ones, all those pearls – I was still buoyed by possibility and wonder. That’s a hell of a thing for a game that came out during the Blair administration to pull off in these modern times. 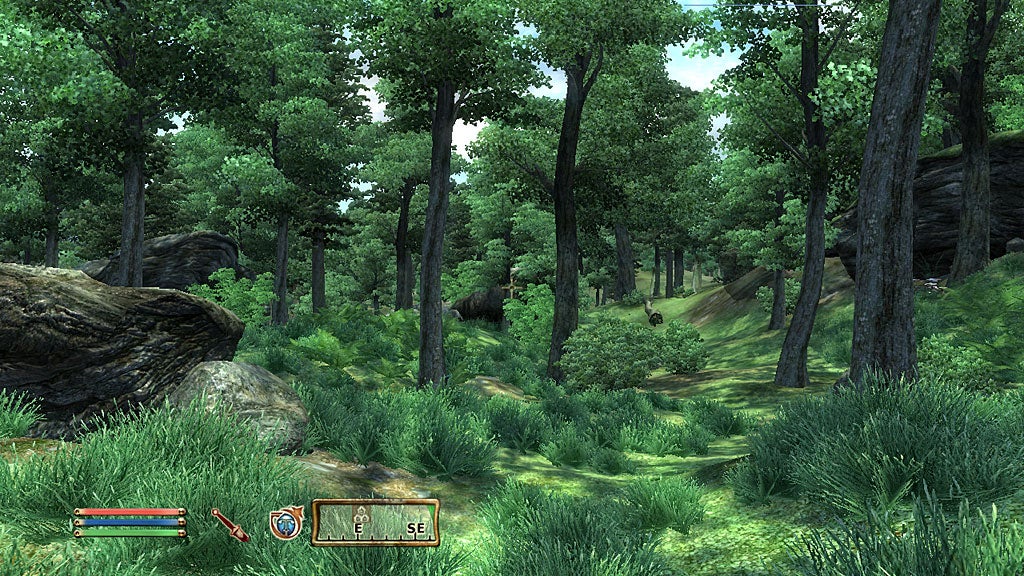 Oblivion’s central genius is in its topography, and the very careful placement of sites of interest on the map. That feels like a slightly obvious thing to say about an open world game now, and indeed it’s been the marketing spiel of many an E3 showfloor developer for years. “See that mountain on the horizon?” Yes mate, let me guess: we can go there right from the start of the game?

But the truth is, there are degrees of subtlety to cresting a hill and seeing something that distracts you away from the critical path. Ubisoft games do it in the most gauche fashion, turning the map into a ball pit of markers. At the opposite end of the spectrum, Elden Ring knows the power of saying nothing, showing just a little, and trusting the player’s curiosity. But Oblivion – without the benefit of many other open world design titles to draw upon – remains the master of wonder and adventure. 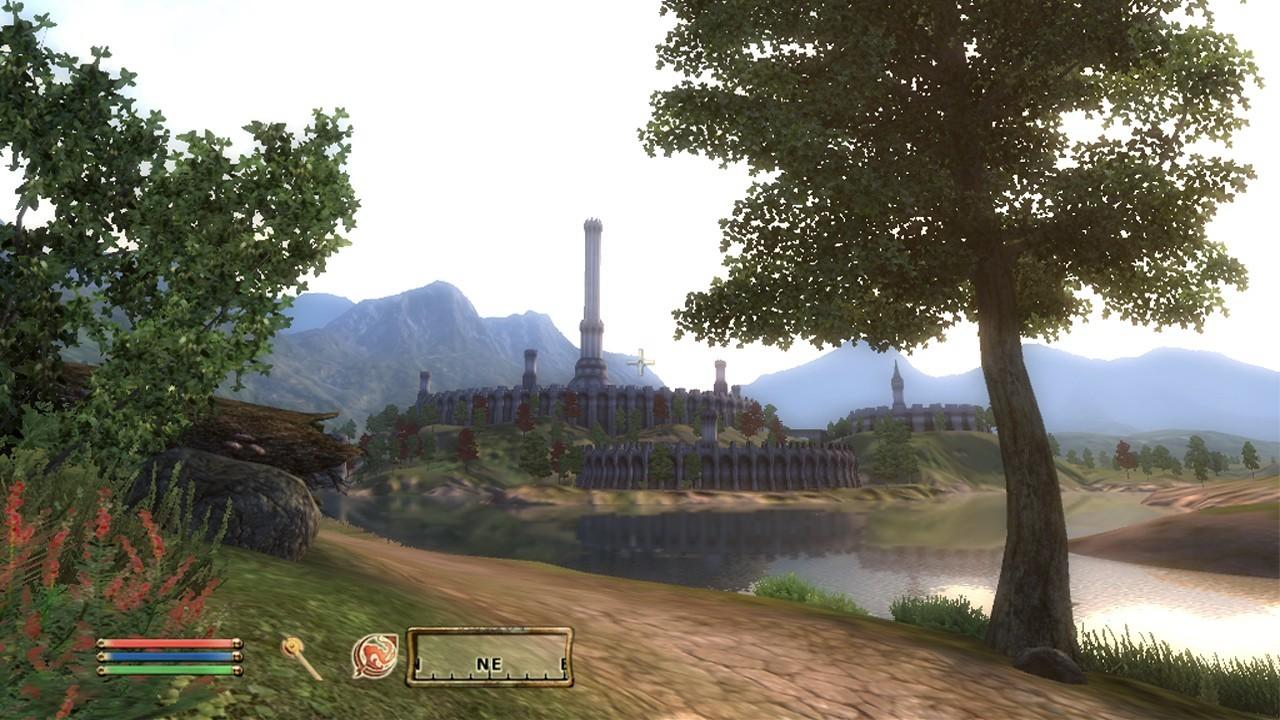 Every single point of interest in Oblivion grabs your attention.

Never are you drawn out of the game and into a cutscene. Never does the passage of time veer away from real-time, unless of course you rest in a cosy bed (or an awful hessian pile in a dank cave), and that continuity really affects the impact of seeing things out of the norm. Every time The Witcher 3 introduces a cutscene or shows you two camera angles of Geralt and an NPC talking, it’s reminding you that you’re playing a videogame. It’s combining the languages of gaming and cinema, giving more emphasis to some elements than others, and when it does so we know that this is all just scenery around us.

But Oblivion commits to the idea that this area you’re in is real, and happening independently of you. Something massive might be happening just out of view. While you’re picking about in the ruins of Kvatch, a squabble in the Cheydinhal Mages’ Guild might be breaking out. You’re scrapping in the Imperial City arena, but who knows what perils Bruma might be facing.

It gets you thinking like this by never veering from its consistent, unbiased perspective of the world. When you first see an Oblivion gate – think about how most games would show you that. A portal to a nasty realm that monsters are using to invade your world. The thing the game’s named after. You’re talking at least three minutes of cutscene, probably preceded by a long NPC preamble in a scripted sequence that takes you to the exact point the game wants you to be in when it first appears. 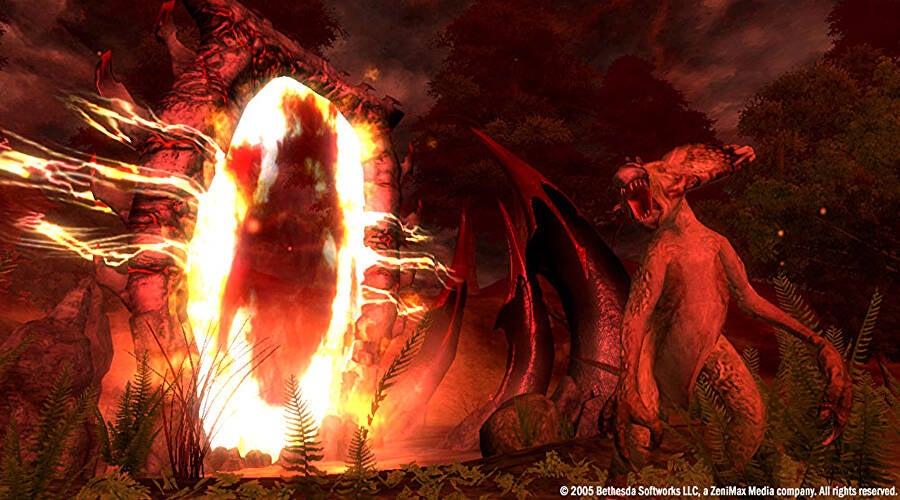 Not for old Oblivion, though. You’re simply told that Kvatch is under siege. So you journey there, notice the sky’s a bit redder than usual, and a couple of NPCs are freaking out on the town’s outskirts, telling you to flee. And then you see it – a massive, shimmering, fiery portal, just… standing there. It’s so much more impactful for simply existing in the world without the usual fanfare. It feels real.

The same’s true of the lower stakes moments. Those walks and horse rides from town to town, the ones you set off on with every intention of going directly from A to B and clearing a few quests from your log in a timely manner. And then you peer round a corner or over a verge you haven’t been to before, and you notice a strange ruin. A gathering of Minotaurs. A traveller by his upturned cart in the road. Oh go on then, you think to yourself. 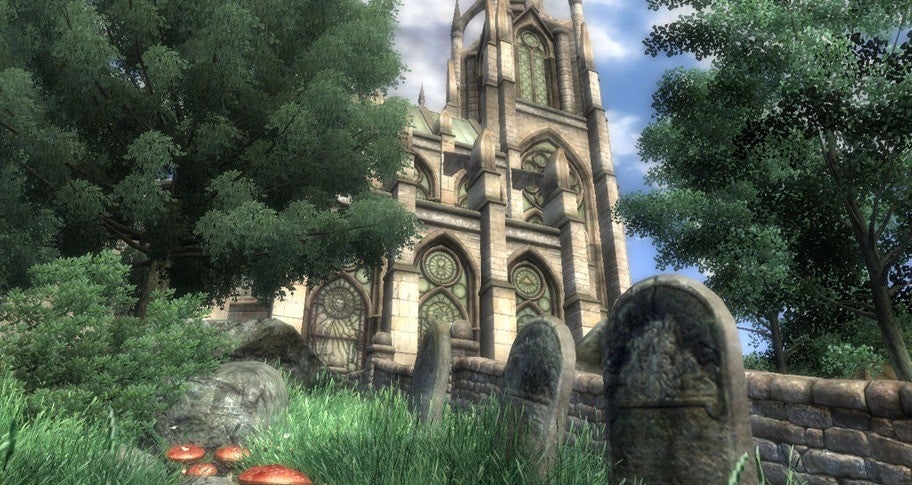 Oblivion's world design keeps you poking the edges of your map, forever.

Often Oblivion follows through with these moments and reveals them to be the beginnings of well-written and unpredictable side quests. But even when it doesn’t, even when the cave is just a cave and the ruins don’t hold an ancient secret, you don’t feel like your time was wasted. Because that diversion just made the world feel that bit more real, and put an extra bit of meaning on everything else you do.

I surprised myself by opting not to install any mods for this playthough; a very different approach from what I took to replaying Skyrim. Well, if you want the truth, I did install one: my original player home, the same one I used in 2005. It really did feel like stepping back into a childhood home, and that’s to be expected when you think about it. I spent months telling myself this collection of polygons was my house. Apparently my brain took that at face value and stored the memories accordingly.

But in terms of the visuals, the items, the combat… I didn’t feel the need to change or update anything. I’m addicted to Skyrim modding, and yet Oblivion made such a strong case for itself in an unaltered state. 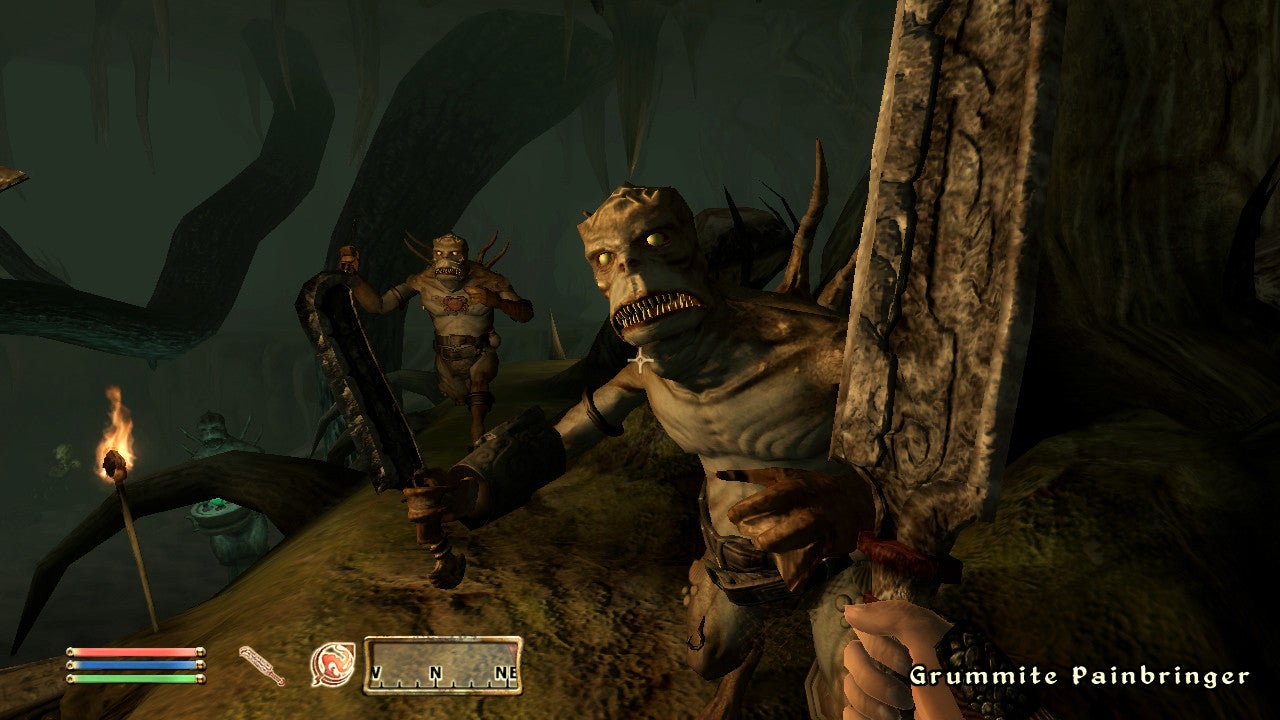 ES6 may look better than this, but will it have the same charm?

It got me thinking about The Elder Scrolls 6. About how important it is for Bethesda Game Studios to retain that real-time passage of time and the unbroken, continuous first-person perspective. This, to me, feels like the absolute nucleus of an Elder Scrolls game having revisited Oblivion, and I’ve become convinced that even if the combat was as primitive as this, and the voice acting just as infamously ropey, ES6 would still be a great game if it builds a world as fascinating, and retains the illusion that it operates independently of you.